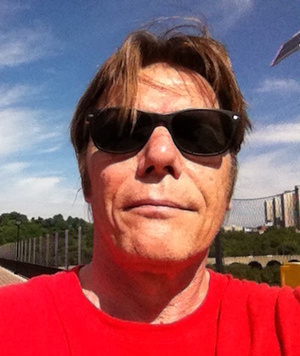 James Bosley was a U.S. Merchant Mariner in the early 80s, fresh out of Queens College, when a random opportunity steered him in the direction of playwriting.

“I was between ships,” James remembers. “A friend of mine who was a photographer said, hey, I got a gig for you. Come over, sit at a desk, and pretend you’re a writer.”

James’s photo landed on the cover of a Writer’s Digest annual, which caught the eye of a novelist. Her book was being optioned for film, and she believed James looked like one of her characters and—get this—she wanted James to star in her movie. Frantic, James, who had no education in acting, enrolled in classes at HB Studio in New York to learn the ropes, but then the novelist stopped answering his calls.

This didn’t upset James too much, though. Reading scenes from plays had propelled him to try something new. James says, “I liked the idea of being in a dirty little dark theater with a bunch of people, creating something. There’s something about the grittiness of theater and the intimacy of it that really attracted me.”

So James set out to write plays. But it wasn’t all smooth sailing—he was out of a job and had just gotten divorced. Luckily, a friend offered to put him up for the winter at his vacant house in the Hamptons. While James was there, he read an article in People magazine about two teenage girls who broke into an elderly woman’s house and murdered her, which became the premise of the second play he’d ever written, called Fun.

“By some miracle,” says James, “Fun was accepted to the National Playwright’s Conference at the Eugene O’Neill Center. I was floored. That’s when I realized I’m a playwright.” Someone in Los Angeles saw Fun and encouraged James to write the screenplay. James did, and was nominated for an Independent Spirit Award for it. This led him to a steady stream of work as a screenwriter and…Gotham teacher.

Five years later, James started a family and had a daughter. He decided to take a break from the writing world to set sail on a new course: getting his real estate license. For ten years, James kept a stable real estate job, but it stifled him. “I wasn’t sleeping well. My family said, you have to stop doing that. Do something else. And I went, well, what do you want me doing?” James had always dreamed of starting a theater company, so they advised him to quit real estate and do exactly that.

And he did. Today James is the Artistic Director at UP, an eight-year-old theater company that has performed original plays in storefronts and church basements around Inwood and Washington Heights, including several plays of his own.

We’re happy to say that James has dropped his anchor back at Gotham, too, as a Playwriting and Screenwriting teacher.