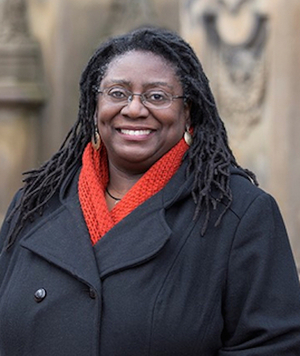 “I actually never thought I could write a novel,” says Gotham teacher and author of Elysium Jennifer Marie Brissett. “When I did it, it was such a shock.” Jennifer, whose second speculative novel Destroyer of Light comes out in fall of 2021, says that while working on the upcoming book, she often asked herself: “Was it luck or can I do that again?” Evidently, she wrote another novel, and is at work on another. “The more you do, the more you can do,” says Jennifer.

With every new project, the workflow is different, whether she uses a notebook for her ideas or index cards for jotting down details and fragments. “I realized I needed to be more flexible with my methodology,” recalls Jennifer. “Just because one thing worked for one project, doesn’t mean it will work for another project.”

One way Jennifer conceptualizes the process of developing a story is through the lens of anatomy. “I sort of think of a novel like a human body,” explains Jennifer. At the start, “I think, well, if I’m going to make a human body, the first thing I need to do is lay out the bones.” At this structural phase, she says it helps to break down the writing into smaller steps: “Let me put the bone of this here, and the bone of this here.”

“Once I’ve got the skeleton laid out, I start thinking about the nervous system.” Here, Jennifer begins to ask: What makes the book work? What is the flow of the book? Then, she adds the connective tissue and “it looks kind of ugly, as you would imagine, if you saw a human body that was just skeleton and nervous system.” With every revision, Jennifer slowly prepares the novel, one layer at a time, until she “beautifies the body, adding clothes, makeup, fixing the hair.” “Eventually, you breathe the breath of life into it,” she says. “It gets up and walks and it leaves you.”

“You have to let it go,” cautions Jennifer. She remembers someone warning her against reading reviews about the book online. “As a new author, you feel all the comments. Any negative comments. You feel it.” Jennifer shares a piece of advice she received from a fellow author at the time of Elysium’s publication: “Go to bed and get off the internet.”

It’s hard work either way, says Jennifer, whether you’re a new writer or you’ve written fifty books. And when you’re writing and feeling insecure, “a blank page is one of the worst things in the world to face,” she says. “But if you have something that you can edit and look at—even if it’s bad—you have something to work with.” So, she concludes, write—even when it’s terrible.

“I don’t know what the word for someone like me is, a late bloomer or whatever, but this is my third career.” Before Jennifer was publishing her writing, she was a software engineer, a web developer, and an artist. Later, she owned an independent bookstore called Indigo Café and Books in Fort Greene, Brooklyn.

When the bookstore closed four years later, Jennifer says she wanted to make a transition in her career. “Octavia E. Butler died in 2006 and I decided that I was going to take my writing career more seriously because it was such a shock that she had died.” Jennifer gave herself the challenge of writing one story a month and within a year, she published “The Executioner,”a story she knew was powerful. The story felt like a gift. “If you wait for that precious moment when you’re inspired and ready to go—well, those don’t really come everyday.”