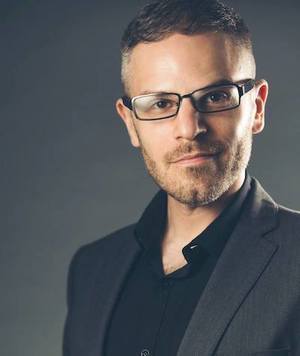 For Gotham teacher Jeremy Wechter, writing, directing, acting, and production are all intertwined. “They’re all the same process—just at different phases,” he says. “Writing is designing a story and directing is implementing that design.”

Jeremy came to film by way of visual art. He was studying at the Maryland Institute of Art when he took a film class and realized he appreciated not just the image but the moving image. He promptly transferred to NYU to major in film. Jeremy explains, “I wasn’t like a theater person coming to film,” which is considered a more typical transition. But both visual art and film are similar, Jeremy points out, in terms of composition and color.

The major contrast between the two is that painting and sculpting are usually solitary while film is more collaborative. “I like working with other people,” Jeremy says. “I like when disagreements happen—when two people clash on ideas and then a third idea is born that’s even better than our original ideas.”

Jeremy has always been open to collaboration. When he served as the Artistic Director for a group called DNA (Directors and Actors), he met twice a week with actors to rehearse published scripts. “I did theater to test myself without the luxury of certain tools that film gives you—camera, editing, etc,” Jeremy says.

The collaborative nature of theater and film has helped Jeremy in the classroom. “I have a better time translating and helping people communicate their ideas,” he says. “When I was a painter, I wasn’t very good at public speaking, and teaching is essentially public speaking.”

Jeremy’s latest project, the horror film e-Demon, is in post-production. The movie centers on former college friends who get together for a reunion. They start playing pranks on each other like they did when they were still in school. But one of them accidentally releases a demon that had been locked away for several centuries by one of the friends’ great-grandmothers. “Because the friends are all playing pranks,” says Jeremy, “the first part of the movie is a psychological guessing game. You never know what’s real or who to trust.”

e-Demon came into being by what Jeremy calls “reverse-engineering.” “I decided to write something I could make on my own and produce with limited resources,” he says. Even though the film takes place in Seattle, WA; Salem, MA; New York City, and Columbus, OH, the farthest the crew traveled to make the movie was Nyack, NY. “I’m sort of getting an unofficial MBA by filmmaking,” he says. “I like to say I made a feature film for the bagel budget of a Tom Cruise movie.” In fact, Jeremy has been working on a post-production fundraiser.

He’s written. He’s directed. He’s produced. So what about the acting?

While it’s true that Jeremy has never formally acted, he did star as Sylvester McMonkey McBean in his second-grade class production of Dr. Seuss’s The Sneeches.