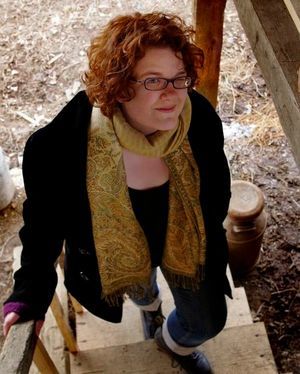 Gotham teacher Jessica Penner is living in New York for the second time. She and her husband originally lived in the city in the early 2000s (she worked for a Catholic peace organization; he at a needle exchange) but left when Jessica got a job at Rosetta Stone in Harrisonburg, Virginia. “I thought in a year or two I’d be ‘over’ New York, but it never went away,” Jessica says. “It’s nice living on the east coast…I can be a Mennonite without the Mennonite baggage.”

Jessica was raised in a Mennonite family just outside of Wichita, Kansas. Mennonites are similar to the Amish, but are less extreme in terms of shunning modern technologies such as computers, cars, and kitchen appliances, and they are free to dress however they want.

Mennonites are also known for their pacifism. In fact, one of the short stories that developed into Jessica’s novel, Shaken in the Water, is based on a family story about her great-grandfather’s refusal to buy war bonds during World War I. So appalled were the townspeople that they actually threatened to tar and feather him. (In the fictional version, the man threatened is saved by his daughter—who had been shunned by the church—when she shoos the mob away with a gun.)

Although pacifism is a long-held tradition, Jessica claims you would be hard-pressed to find a Mennonite family in a rural area who didn’t own a gun. “Now a lot of my distant cousins are in the National Guard, so it’s a bit of a one-eighty from three generations ago” she says. “I would consider myself a pacifist, but I also don’t have to risk my life for it.”

Throughout her entire life, Jessica was surrounded by people of the religion—in Kansas, in college, and later when she moved to Virginia. (The town of Harrisonburg happens to be “Mennonite mecca,” according to Jessica.) “Even when I moved to New York the first time, I found more Mennonites!” Jessica says with a laugh.

“You always think, ‘you can be a writer anywhere,’” she says. “Which is true, but there’s a little more of an impetus to keep up your writing here in New York.” While she was living in Harrisonburg, Jessica found it easier to put off writing—partially because she didn’t feel the same pressure to succeed as she felt in New York.

“I did have a really great writing group there, though,” she says, “and it helped when I started writing my novel. But both my husband and I felt like we didn’t fit in, we didn’t have kids like everyone else. It was a different lifestyle there.”

Jessica had planned on moving to New York in the fall of 2001, but then she developed a brain tumor as a result of Ollier’s disease—a syndrome that stunts the growth of bones on one side of the body, and grows tumors. Her surgery occurred on 9/11, just a few miles from the Pentagon, and now she is working on a memoir about her experience. “My body and New York City will always feel connected,” Jessica says. “At the time, I didn’t want to believe my neurosurgeon—that the surgery would change my life forever—and post-nine-eleven New York is always going to be different, too.”

On this second time around, Jessica wants New York to “happen” to her. “I’m more in the reality of things,” she says, “like writing about my surgery and nine-eleven. The city is sort of my spiritual core.”