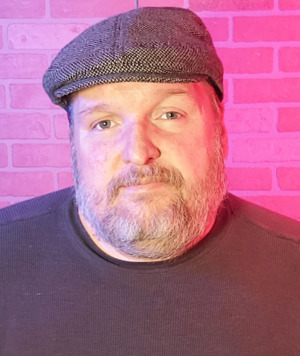 
Having dipped his toes in just about every comedic pool—from stand-up to television to playwriting to screenwriting—Gotham TV Writing teacher Jim Mendrinos has found there is more than just one path to being funny.

Officially, Jim began performing stand-up comedy at the age of nineteen. Unofficially, he says he was probably the only eight-year-old kid who could do a Foster Brooks impression. (For those of you who don’t know, Foster Brooks was a comedian whose main gag was telling stories with a drunken hiccup.) Then, Freddie Prinze came along and altered his comedy world. “Before Freddie, comedy was all gags,” Jim says. “But he talked about living in a crappy, walk-up apartment building and I lived in a crappy, walk-up apartment building. He had roaches and I had roaches. He had a crazy super, I had a crazy super.”

Before long, Jim performed stand-up at the fabled Catch a Rising Star in New York City. “I waited in line to get an audition. By the time I got on stage, it was 1 am on a Monday morning.” Then Jim hit the road. “I had followed a young lady down to Nashville, as most stories go,” he laughs. “The two loves of my life at that time were comedy and whatever woman I was chasing.”

As luck would have it, the producer of Hee-Haw saw one of Jim’s shows in Nashville and hired him to write one-liners for the television show. (For those of you who don’t know, Hee-Haw was a country version of Laugh-In.) Throughout his career, Jim has worked for David Letterman, The Tonight Show, The Chevy Chase Show, Head of the Class, Roseanne, and Saturday Night Live.In addition, he has been staffed on nine TV pilots and optioned eleven pilots to different networks.

“Your reputation is currency,” Jim stresses. “I’ve never missed a deadline in television, which is rare. I get calls that I think are slightly beyond my talent, but I get them because they know by hook or by crook, it’ll get done.” But, on the other hand, as Jim tells it, “You get hired to get fired. I have the honor of being fired by Tina Fey.”

Jim has also dallied in political humor as a frequent guest on Fox News’s Strategy Room website. Jim says, “It’s a lot of fun until people start yelling. Then, it becomes a horror show. There is more of a left versus right conversation than a right versus wrong.”

“If it weren’t for a lot of patient and wonderful writers,” Jim says, “I’d probably be an accountant.” He adds, “I had a great advantage starting out so young. When you’re floundering at 19, people want to help you. When you’re floundering at 45, they don’t want to as much.” Far from floundering, Jim now has the resources to give newer comedians a chance to get off the ground.  He produces the New York City Underground Comedy Festival, which has helped at least 70 comedians get on television for the first time. He says, “I wanted to help people in the same way that my mentors helped me.”

Jim’s experience in stand-up has helped him teach TV in the classroom. “Stand-up teaches you how to read people,” he says. “I know how to change my approach based on reactions. I can see if people are getting it.” (And for those of you who don’t know, Jim teaches TV Writing for Gotham.)