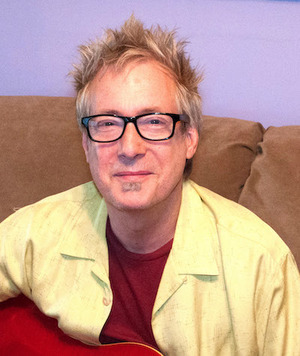 
Gotham Songwriting teacher Jody Gray’s father worked on steamship lines, designing cruises and tours, which came with several fringe benefits—one of which was exposure to world music. His father brought records back from Sweden and the Caribbean and everywhere in between.  Later the family moved to Ireland where as a teenager Jody frequented pubs near Dublin, experiencing a wide variety of live music.

Jody then spent almost a decade experiencing European music in and around the UK, Ireland, Germany, and Holland. The more he traveled, the more musical influences Jody found. He was interested in literary and poetic traditions as well. “When I was a kid I got sidetracked into writing,” Jody says. “Then I realized girls wanted musicians, not dark poets sitting in the corner.”

When it comes to his musical likes and dislikes, Jody invokes the Oscar Wilde quote: “There is no such thing as a moral or immoral book—books are either well written or badly written.” He is partial to the great singer/songwriters of the 60s and 70s, such as Paul Simon and Joni Mitchell, and the musical theater work of Stephen Sondheim. But Jody is open to just about any sound—from jazz to country to alternative pop. And he alternates between songwriting and composing scores for film and television.

“Honestly,” Jody says, “the more you have a facility for music, the more you can do.” He points out that when you’re scoring a piece, you’re writing for every kind of instrument, even if you don’t play it. Jody himself plays piano and guitar, but he says, his favorite instrument is whatever best suits the piece he’s working on.

Once, Jody was asked to write music for a scene involving a merry-go-round in which the director did not want to hear a calliope because the director hated the sound. (Jody thought that was the musical equivalent of hating a preposition. He protested, saying, “It’s what the audience expects to hear!”) But part of working in TV or film is the ability to collaborate. “All of the arts sort of came together in the twentieth century,” Jody says, referring to the silver screen. “You have art, fashion, writing, and photography all in one.”

It seems Jody does a bit of everything, musically. Recently Jody finished working with an Italian metal band, writing tracks for New Country artist Lisa Matassa, and co-writing Special Musical Material for Jimmy Fallon and Rachel Dratch for the 2012 Writer's Guild Awards. And someday he hopes to write a full-length opera!