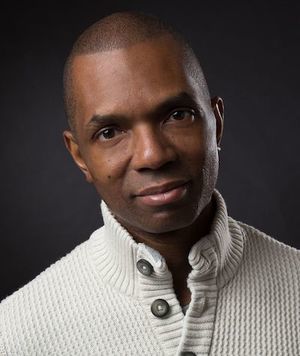 Joe Okonkwo spent his fortieth birthday in Mexico City, binge-watching American reality TV shows in his hotel room because he felt he “hadn’t accomplished anything.”

What Joe wanted was to be a published writer. In Mexico…he felt his internal literary clock ticking.

“I always had a creative imagination,” Joe says, flashing back to his past. “I’ve always written: stories, plays, poetry.” And Joe had plenty of material to draw from, having grown up “all over the place” in New York, New Jersey, Michigan, Nigeria (where his father was from), Mississippi, and Texas, all between the time he was born and his ninth birthday.

When Joe was a preteen living in Houston, he split his time between reading about movie stars in the World Book Encyclopedia and writing his first novel—Conrad: City of the Demons. “It was about this drifter named Jerome Perkins who goes to this town where everyone is possessed by demons,” says Joe. “And then I totally revamped it as a romance called Hearts of Fire. I was hoping to get it published by Harlequin.”

Harlequin did not, unfortunately, publish Joe’s spicy, demonic romance, but he happily continued to write stories anyway. In the meantime, as his passion for the stage grew, Joe decided to study theater at the University of Houston. After some time working in children’s theater and with an artistic director in the area, Joe packed his things for New York City.

It was a writing contest in a magazine that inspired Joe to try his hand at getting published again. “The word limit was 1,500,” Joe says. “I had had this story in mind for a while, and I thought, oh yeah. I can write this in 1,500 words. And then of course it just kept going and going and going.”

Joe worked on his novel, an homage to the Harlem Renaissance, the 1920s, and Jazz-Age Paris, on and off for the next few years. Then, in order to support himself between theater jobs, Joe took a position at a phone company as a call service representative that was truly “awful”…and maybe marred his spirit a bit. In that Mexico hotel room in 2010, Joe realized he would have to buckle down if he ever wanted to find success.

“Later on that year, I applied for the MFA program at City College of New York and got in. And since then, the writing is something I’ve taken very seriously,” Joe says.

“Twelve years and 93,000 words later,” he smiles, remembering when Kensington Books finally published Jazz Moon, “I had a book.”