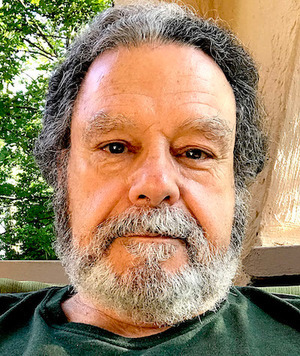 
While the rest of Athens, Ohio sleeps…a team of ghosthunters investigates an old lunatic asylum (circa 1870) for paranormal activity. They have set up cameras, voice recorders, and other gizmos in the hopes of catching a hint of the lingering dead. This was the last place Gotham Humor writing teacher John Kachuba ever expected to be, but, by this point, ghosthunting had become a whole new career for him.

Growing up in Connecticut, John learned about colonial history, including various local legends and ghost stories. He had a chance to meet Ed and Lorraine Warren, the two main investigators of the Amityville Horror, whom John calls the “godfather/godmother of ghosthunting.” But even after that fateful meeting, John never imagined that he would become a ghosthunter himself. In fact, until he was contracted to write Ghosthunting Ohio in 2004, the paranormal was barely a blip on John’s Ghost Meter.

Now John has investigated more than 100 locations both in the United States and abroad. In addition to Ghosthunting Ohio, John has written or edited books on ghosthunting in Illinois, New Jersey, Kentucky, Florida, and Texas, and he has investigated old insane asylums, mansions, museums, and everything in between. John’s visits range from casually wandering a site for a couple of hours to pulling all-nighters in locations equipped with ghosthunting gear.

He finds his ‘accidental’ ghosthunting phenomenon typical for many writers: “Something catches your imagination–whatever it is–and then a story comes along. You get caught up with it, start doing research. If it really catches your interest, you ride that train for a while.” In fact, he notes that after his first book was published, he realized he was fascinated with broader paranormal and metaphysical subjects; he has since spent time in a monastery in Kentucky and will soon explore Voodoo in New Orleans.

And, of course, there’s his funny side. John edited the How to Write Funny anthology—a collection of articles and interviews featuring both well-known humorists like Dave Barry as well as writers not considered traditional humorists such as Sherman Alexie. John thought readers could learn from these writers with diverse backgrounds and talents, which he notes “matches the demographics of Gotham students.”

John tells his students, “Don’t be so locked into your story that you can’t deviate from it. Follow that thread! It may lead you to another story, even better than where you were going originally.” True to his word, John has allowed his own writing to evolve. His next project is a young adult novel about a twelve-year-old boy who deals with paranormal activity while his father is away fighting in Afghanistan.

But back to that all-nighter at the Athens lunatic asylum. After the crew wrapped up the night’s activities, John did what he always does: gathered and analyzed the data. He listened to hours and hours of silence on the voice recorder that had been planted in the basement’s padded cells. Eventually…he heard a voice pleading, “Would you help us?” It was then that John experienced what he calls “the ten-second high” that all ghosthunters live for: the moment you finally hear or see something.