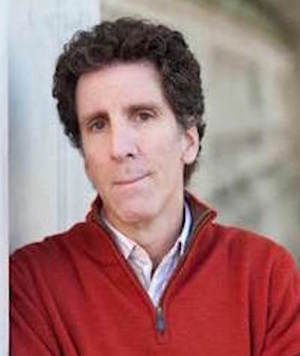 Gotham Teacher Jon Reiner thinks some of the most interesting, worthwhile, and exciting things in his life have happened to him by accident.

One moment he was considering his grandmother’s tuna fish recipe for lunch. The next Jon was doubled over, hit by a crippling episode triggered by Crohn’s disease. The doctor’s orders called for months without taking any food or drink by mouth.

In the hospital, Jon’s Esquire editor Mark Warren asked him to write a feature article about his prescribed deprivation. Jon submitted 15,000 words. About 10,000 too many. “That’s okay,” Mark reassured him. “You’ll use it for the book.”

That book is now a critically-acclaimed memoir called The Man Who Couldn’t Eat, based on Jon’s award-winning Esquire story.

Jon can eat now, but he continues to receive emails from readers all too familiar with the nothing-by-mouth regimen. They share their stories with him. Which is humbling. Jon says the upheaval and consequences they face are often extreme and make what he had to endure look like “a mosquito bite.”

Still, Jon likes his memoir to be judged not by how sick he was, but by its literary merits. Like some of his favorite writers Ian McEwan, Jennifer Egan, and F. Scott Fitzgerald, Jon enjoys taking on the challenge of crafting perfect sentences. (Speaking of Fitzgerald, Jon rereads The Great Gatsby every summer, much to his wife’s bewilderment.)

Two years after his memoir was published, opportunity struck Jon a second time. He had an idea for a documentary called Tree Man about the community of Christmas tree salesmen who trek to New York City every holiday season. And he knew just the right people to recruit to make it happen: fellow parents whose children, like his, went to PS 166.

They all had the types of professions that enabled them flexible schedules—writing, cinematography, editing, and the like. Jon and his cohorts had been meeting afternoons on their kids’ school playground for quite some time. “Over the years,” Jon recalls, “we’d talk about how fun it would be to do a project together.”

Unsurprisingly, they were game for Tree Man. “PS 166 Productions” successfully completed the documentary, an official selection of the 2015 Montreal World, DOC NYC, and St. Lawrence International Film Festivals. The film has been acquired for distribution this coming holiday season.