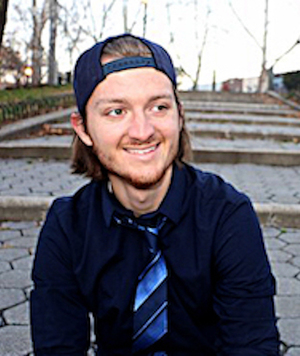 “About once a month I have to force myself to turn on my PlayStation,” says Gotham’s resident Blog and Podcast Expert, Josh Sippie. “I am rarely not writing.”

He wasn’t always this way. As a kid in St. Louis, Josh was into sports and crime scene investigation television. He played basketball, baseball, soccer, and ran cross country. Zero was the amount of interest he had in reading and writing. He blames this on a series of bad English teachers. “I thought reading was horrible,” he says and elaborates, “like: the worst thing ever.” Instead of picking up the books he was supposed to read for class, he cheated and skimmed the Spark Notes online.

Well, first, enter good, non-boring, English teacher who assigns Hard Times by Dickens to her students in twelfth grade. “Mrs. Rathje just flipped everything I thought about reading on its head.” After that, Josh read everything he could get his hands on.

After graduating high school, Josh was still in his St. Louis state of mind. “When you ask people there what their passion is and what they want to do, they just say that they want to make a good living.” So, he entered the University of Central Missouri as a forensic chemistry and criminology major. He decided he was going to make his living by being the person who solved the mystery of how someone was murdered. But shortly after a bloody incident involving steel wool he realized that he wasn’t on the right path. “I went to my dad and told him there’s nothing I want to do that will make me sure money.” His dad’s reply: Do what you love. Josh switched to a double major in History and English the very next day.

This is when Josh began to obsessively write. He started his first blog freshman year. And then he started many other—mostly baseball related—blogs. He had a comedy blog. He wrote a few novels. “I just wanted to write.”

After graduating, Josh was recruited to blog about his favorite baseball team, the Astros. And then he got another job writing for a soccer blog called Pain In The Arsenal (which he still writes four articles every single day for). But he had to make money to live and found himself as a door-to-door and over the phone salesperson selling cable, windows, and “software to build space shuttles to NASA.” Inevitably, he walked out of his job and moved to New York. “Because that’s where writers live.”

Since moving to the city, Josh has gone through one lap top a year. “They can’t keep up with how much I’m writing,” he says. His efforts have paid off and he has seen his creative writing and sports writing published in McSweeney’s Internet Tendency, Hobart, The Guardian, and CBS, to name a few.

After an internship with Gotham Writers and a year as a literary agent’s assistant, he has found his way back to Gotham in a full-time role, as their Director of Contests and Conferences, and also heads their Blog Launch and Blog Boost offerings, working one-on-one with students to see their blogs come to life. “I just like the idea of blogs,” says Josh. “Anything else, you have to submit it to someone and wait for months to find out if it’s going to be published. But with a blog you can do whatever you want. There’s five hundred million blogs out there. When you think about it, there are so many people finding their voice by starting a blog.”

When Josh isn’t working at Gotham or blogging he’s… writing. “Anytime I have any free time, I just pick up my laptop and start to write.” Along with his e is currently working on several middle grade novels.

When asked to guess how many pages he writes a day, Josh says, “I’ve always had this joke that when I get to heaven, I’m going to ask God how many pages I’ve written in my life,” he says with a twinkle in his eye, “because I’m just as curious as you are.”