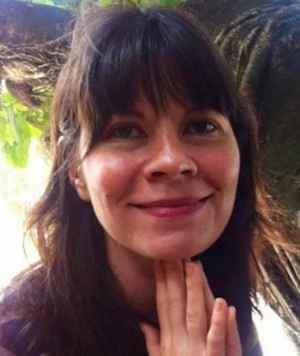 When Gotham teacher Kate Angus reads a poem, she likes to see a specific kind of balance.  She’s not interested in reading a map, but she also doesn’t like her poems overwhelmingly cryptic, “like a house with all its curtains drawn and doors locked.”  Kate holds this aesthetic paramount as a poet, as well as the editor-in-chief of Augury Books.

Founded in 2010, the press is primarily poetry-focused, but Kate is also interested in publishing short story collections.  As she puts it, short stories are perfect for a subway ride—packed with emotional intensity but short enough to digest in just one sitting.

Kate founded the press with a friend from graduate school, with the intention of eliminating the favoritism that sometimes plagues the literary magazine/small press world. “Of course, we were a bit naïve,” she says, acknowledging the somewhat incestuous nature of the literary world, especially in poetry. If you go to enough events, teach enough classes, you will eventually stumble across a submission from someone you know.

Kate believes that the general population is being “unconsciously primed to enjoy poetry” through the accessibility of the Internet. “The great thing about poetry on the Internet,” Kate says, “is that you can go from X poem to Y poem to Wikipedia to a news article.” Meaning, that as you read a poem online, you’re perhaps more likely to explore the web for a related news article or a Wikipedia entry on the author or the subject matter. (Also, if her Gotham classes are any indication, poetry is capturing the attention of people from ages twenty to seventy—a much wider range than one might think.)

Technology is useful to writers because art has always been about solace, Kate believes, and an individual can still engage with the world at large without actually going into it. Also, it’s particularly helpful for those without access to a great poetry section in their local bookstore. Kate says, “Although I fully stand by the notion of books being objects, the Internet is well-suited to help poetry have a home.” In fact, Kate cringes when she sees people walking down the street while texting on their phones, but on those rare occasions  when she sees people walking and reading a book, Kate says, “Now that just makes me smile.”

Kate has also created a close-knit community of writers. This started one summer when she and fellow Gotham teacher Diana Spechler met at the Interlochen Arts Camp where they were both teaching. Kate likes to say she and Diana immediately fell in “friend love.” When Kate was hired to teach at Gotham, she met another Gotham teacher, Shelly Oria, during teacher orientation. And later, when she was at The New School for her MFA, Kate met Carter Edwards, who has since been added to the Gotham roster, teaching poetry and creative writing 101. Kate’s group of writer-friends have been supportive of one another’s projects, often share a glass of wine and/or a meal, and even travel around the country together.

“I love having a community of writers,” Kate says, “but I also need to concentrate on my own work. Something has to give. Usually, for me, it’s how clean my apartment is.”