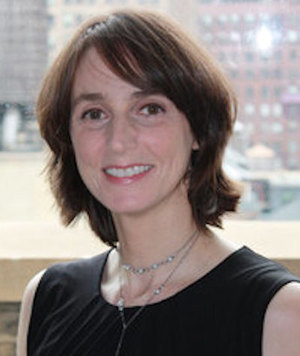 Anyone who’s had the joy of talking to Kelly Caldwell for at least ten minutes knows that if laughter really is the best medicine, then Kelly is going to live forever.

In other words, she smiles and laughs. A lot.

What’s the secret to Kelly’s sunny disposition? She does what she loves to do: writing, teaching nonfiction, spending time with people. As dean of faculty and a Gotham teacher, Kelly gets to do that pretty much all of the time.

Kelly has been a lover of words and people all her life. Growing up in the ‘burbs of Chicago, a spunky seven-year-old Kelly used to read and spy on her neighbors from her attic bedroom. (“The girl who lived across the street, she would lie and tell everyone her parents let her stay up until midnight to watch the scary movie that was on TV. I knew her light went out!”) Kelly’s curiosity followed her into grade school, where she was drawn to interviewing her fellow classmates for school newspapers.

When it came time for Kelly to pick a career, journalism seemed like an apt choice. Kelly’s first post-college, professional job was at a small-town daily in Western Michigan called the Holland Sentinel, “a teeny tiny little paper” where she reported on county government stories related to things like public health, township planning, and school board meetings.

Reporting didn’t just bring Kelly joy—her stories kept locals informed about important topics, like the AIDS epidemic and where the county planned to build a new jail. So, sensing she could write stories with a wider reach, Kelly left the Sentinel after six years and set out to boost her writing skills by getting a Master’s degree at the famed J-school at Columbia University.

After Kelly graduated, she landed an internship with New York Newsday. The problem? That year, several major newspapers in the country either folded, fired a slew of reporters, or went on strike…including New York Newsday, which was closed down by corporate owners in the midst of her internship.

After a little freaking out, Kelly regained her natural optimism, and, luckily, Newsday, a partner of New York Newsday, continued to publish. So Kelly wrote “coping features” about relationships, family matters, and mental health, and was so skilled that her editor invited her to continue freelancing after her internship expired.

There was, of course, the occasional ‘light’ assignment. An editor once sent Kelly to the Javits Center to cover a cat show competition. “It was never the same thing,” Kelly recalls of her assignments. “Retirement one week, cats the next.” And there’s that laugh again.

In the “2000s-ies”, a colleague suggested that Kelly should consider teaching. That appealed to Kelly—she could still work with people while supporting her freelance career with a more stable job. Kelly happened to be reading Poets and Writers when she stumbled upon an ad to teach for Gotham.

That was thirteen years ago. Now, Kelly’s a Gotham veteran who adores her students and the Gotham instructors she gets to work with every day. But she hasn’t stopped writing nonfiction stories. Kelly is currently working on a memoir about her experiences with The Salvation Army and disaster aid after September 11th.

Here she is now, toting an armful of eucalyptus to brighten the Gotham lobby.

Hey, if you really want to crack Kelly up, just ask her about the time she and her husband Kent spontaneously adopted Pops, a part-mutt/part-dinosaur, from a truck in Union Square.