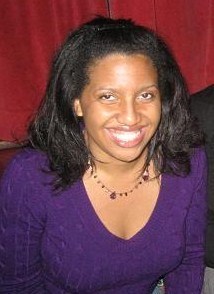 Gotham teacher Kellye Garrett never believed in psychics—until one told her that she needed to quit her job and start teaching. One week later, she got a call from Gotham saying she was hired to teach TV Writing and got a new full-time position working as a marketing writer for Sharp Electronics.

Kellye always loved mysteries, so it’s no surprise that when she went to work in TV, she landed a gig writing for Cold Case—a crime drama focused on disturbing, grisly murders. But after a while, she found that brainstorming ways to kill kids wasn’t how she wanted to spend most of her time. Also, she loved the collaborative nature of working on Cold Case, but not the undefined—and often unstable—job path that Hollywood has to offer. Kellye learned that a show you’re working on can always be canceled; there’s no security in the business.

When she was still living in L.A. and feeling particularly broke, Kellye spotted an advertisement for a cash reward to help solve a local crime. She thought, somewhat jokingly, “Wow, what a great way to make extra money.”

This little germ of an idea led Kellye to writing her first mystery novel. Her main character is an out-of-work actress who sees an ad very much like the one Kellye found and starts solving crime for the money. But make no mistake—this isn’t Cold Case in book form. In truth, Kellye was always drawn to more “lightweight mysteries”—dark stories that balance the disturbing with a chuckle.  “No one is getting tortured and cut into a million pieces in my book,” she says. “And I save the joke for a button at the end of any action-packed scenes…she [the main character] survived, so now she can make a joke!”

“I was always wanted to write a book and I did almost every other kind of writing except novel,” Kellye says. She went to film school, wrote scripts, and worked as a journalist and television writer.  And while she genuinely enjoyed covering television and film for Vibe magazine, Kellye wanted to be in the industry instead of just writing about it.

And while she doesn’t despise L.A., she insists that spending so much of your time in a car is a huge hindrance for a writer. She recently moved to back to the East Coast and finds that in contrast, New York offers the freedom to observe as you walk down the street or travel through the subway.

And it would appear that Kellye is putting that freedom to good use. She’s currently working a web series project with a group of friends called Weave Thieves. It’s a satire on the heist movie genre—with the thieves stealing hair extensions instead of money.

Wonder what the psychic would have to say about that.