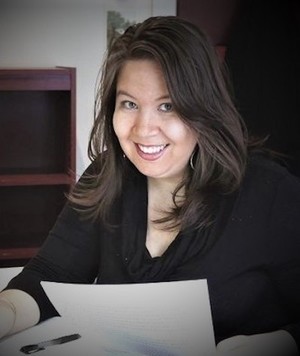 Gotham nonfiction teacher Kim Liao tasted the glory of writing for a captive audience at an early age. In elementary school, she and a friend wrote spooky chain-letter style stories for fun. “They were sort of like Goosebumps meets Scooby Doo,” recalls Kim. Their friends would wait with much anticipation for each installment. “I remember wanting to end on a cliffhanger, so they’d want more,” says Kim of her first lesson in craft.

When Kim was a child, her father worked as a technical director at a local theater on Long Island. Being around the energy of the theater prompted Kim to try her hand at writing plays. Later on in high school, her writing focus transitioned from playwriting to fiction. But it was only after she graduated from Stanford and started a master’s program at Emerson College in Boston that she discovered creative nonfiction.

For Kim, it was love at first workshop. She found that this budding genre was a way to “merge fiction and narrative techniques with research.” This appealed both to Kim's creative side and to her academic side. She quickly rearranged her degree, changing it from MA to MFA and decided to follow her true callings: teaching and writing.

It was also at Emerson that Kim stumbled into her father’s family history, which would become the axis of her forthcoming memoir. “I knew a lot about my mom’s Russian-Jewish side but didn’t really know about my dad’s Taiwanese side,” says Kim. The story she slowly uncovered was of a major Taiwanese Independence Movement after World War II, which her grandfather led.

At first, Kim’s father didn’t know much about his family history and preferred it to stay that way. “He was like, don’t write about this. So, of course, that made me want to write about it even more,” says Kim. She set her sights on visiting Taiwan. She applied for a Fulbright Scholarship, but she recalls that even if she didn’t get it she would still go and teach English. “Either way,” she says, “I knew I had to go to that part of the world.”

Kim spent just over a year on the island, which proved to be a fruitful adventure. “I was coming across the impact that he had on people. There was this sort of spirit or legacy that was trying to be found.”

After returning from Taiwan with tons of information to weave into her story, Kim made another leap and moved to New York. She picked up freelance copyediting jobs and worked in restaurants. “If you do want to be a writer I recommend doing a job where you meet a tremendous amount of people,” says Kim. But she soon realized she wasn’t making enough money to support her writing, and found she was spending more time on her feet than on her story. After her two-year stint working service jobs she emerged with the first draft of her manuscript, but says, “it was more of an exorcism of demons than a polished product.”

She ended up finding a steady job working for an immigration attorney where she did legal writing for the majority of her day. This job gave her the structure, stamina, and paycheck she needed to really settle deeper into her own work. In the mornings before heading to the office she would write, and this writing found homes. She has been published in The Millions, The Rumpus, Salon, and Lit Hub to name a few.

Now, after four years, Kim quit the day job to dedicate all of her focus to her goals. She is teaching full time and she also predicts that this is the year she’ll finish her manuscript. And like her very first fans from her elementary school days, we can’t wait to read what happens next.