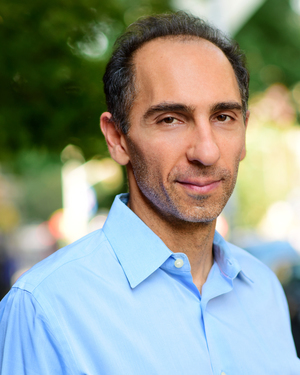 Gotham teacher Kuros Charney fell in love with the theater by way of film. While studying at USC’s film school, he took a directing course in which the professor asked, “Have you ever thought about writing plays?” His natural ability for crafting character and dialogue—what Kuros calls the “essence of a play”—inspired him to take the leap from the screen to the stage.

And that’s not the only leap he’s made. Kuros has also sat in the director’s chair. When he’s deciding how to direct a play, Kuros looks for clues in the script. For this reason, he calls himself “a writer’s director.” (In other words, a director who is very faithful to the words on the page.) He works with actors to bring other writers’ characters to life, and vice-versa. Kuros has had many positive experiences working with directors who have done due diligence to his own work. “I’ve listened to them [directors] talk to actors and reveal things about the story that I didn’t even think of!” Kuros says. “It’s what drives me to this form—your writing is going to be performed, so you’re always inherently collaborating.”

Collaboration is indeed one the unique aspects of playwriting. “When you’re writing a novel,” Kuros says, “you think you have total control, but you can’t control what the reader is thinking or their visions. In a drama, an actor is kind of doing this extra work to get certain things across to an audience.” For example, an actor has the ability to give his or her character physical attributes (in the form of mannerisms, movements, or speech patterns, etc.) that can be difficult to convey solely on the page. Because a theatrical production is the result of a group effort, a playwright has some advantages over a prose writer. For one, he can engage in discussions with the entire creative team about various decisions.

Kuros notes the main challenge for those new to playwriting: all the action has to be contained to the theater itself. “Were you picturing this on a stage or in the real world?” is a question Kuros frequently has to ask his students. “When you’re reading a play, you have to be able to imagine all the action occurring on a stage,” he says. “You don’t have the same kind of liberty that you do with a screenplay.”

Simultaneously, it can be said there isn’t quite as much room for collaboration on a big budget film as there is in an Off-Broadway theater—or a theater anywhere for that matter. Kuros points out vibrant scenes in other cities around the country—San Francisco, Chicago, L.A., and Minneapolis. Outside the US, Kuros turns to London, which is considered the theater hub of the entire UK. But our neighbors across the pond have a distinct advantage: most of the UK is only a few hours away from the capital. “Because we’re [the US] so large, theater is inherently a regional art form,” Kuros explains. “Here, you’re really engaging with individual communities.”

Ironically, even as theaters have grown across the country, there are still some who believe the art is dying. But that doesn’t faze Kuros. “I’ve been hearing theater is dead for as long as I’ve been alive,” he says. “The real question is what makes people say theater is a dying art form? Is it because of money? Because it’s not as lucrative as film or television? We might as well tear down MoMa, the Met.”

Kuros asks, “Does art always have to serve the largest audience? No, because that’s not culture—that’s mass culture. I don’t think anyone would want to live in a world like that. Different art exists for different people.”

Currently, Kuros is at work on a play that explores his Iranian background. (His mother left Iran in the mid-1960s to pursue a medical internship in New York where she would become a physician and meet Kuros’s father.) He’s interested in delving into the society and culture that many Americans know little about. Between his mother and extended relatives, Kuros will have many different stories to tell.

“We’re always saying ‘write what you know,” Kuros says, “but I think ‘know what you write’ would be a better maxim.”