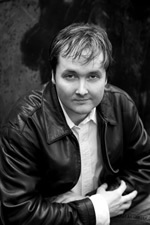 
Gotham Memoir teacher Kyle Minor is a classic example of how you can’t escape your past.
Raised in a Southern Baptist household, Kyle considered becoming a preacher, and, in fact, he was an associate pastor for a brief time. On his path to the pulpit, he studied the history of Christianity and the formation of the canon and philosophy, and the more he learned, the more trouble he had with his faith. “In a sense,” he says, “the good faith of Christianity made me decide I wasn’t a Christian.” It was a defining moment in Kyle’s life; he likens his leaving of the faith to moving to a foreign country.

The country he migrated to was Literature. As a writer of both memoir and fiction, Kyle says, “Aspiring memoirists should read and study novels.” All forms and genres are valuable, he claims, because they have a wealth of tropes and language that memoirists don’t fully take advantage of. Specifically, Kyle points out that poetry “has a relationship between consciousness and the image.”

Kyle has been following his own advice for some time, studying fiction, nonfiction, andpoetry at Ohio State University while he pursued his MFA. He says, “My writing was enriched by each genre.” Today he teaches all three genres at the University of Toledo, calling himself a “jack-of-all-trades.”

A few years ago, Kyle had planned to spend time in Haiti to work on a screenplay. When the screenplay deal fell through, Kyle went to Haiti anyway. He got in touch with an American missionary (not a proselytizing one) and joined him and his wife who were in the process of fixing up an abandoned orphanage. He has revisited Haiti several times, intrigued by the place and the people.

Kyle says, “Reading and writing have taught me there are basic human things that transcend your family, politics, culture, etc. Everyone has trouble making an adult life in the shadow of their childhood. Once you figure this out, you realize—whether you’re writing about Haiti or space aliens—ultimately, you end up coming back to these same things.” Indeed, you will find religion in both of Kyle’s books, a short story collection entitled Devil’s Territory and a forthcoming novel The Sexual Lives of Missionaries.

Teaching at the university and online for Gotham, plus working on three books simultaneously, leaves Kyle breathless. He confesses he sleeps about only four hours per night, which allows him time to pursue his writing and teaching and still have time to spend with his two kids. One could say he lives his life with a fervor that borders on … religious.