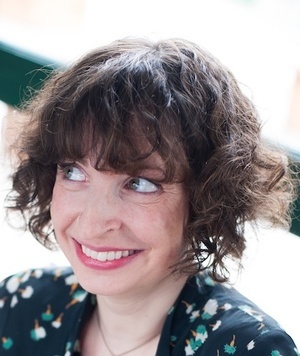 “I don't think that you should let somebody else tell you what your writing career looks like,” Gotham teacher and multi-hyphenate Lara Ewen says. As the former editor in chief of a fashion magazine, a journalist who has worked with publications including Women's Wear Daily and Rolling Stone, and a musician who’s released three albums, Lara has much to say about a creative career in the writing world.

Lara’s writing career began at Boston University where she studied poetry. This was also where she received her first assignment as a fashion journalist:

“I was working at a vintage clothing store, because clothing is awesome,” Lara says, “and a friend of mine, who was working at the college newspaper, says something along the lines of, so you're like, a writer, right? And you understand, like, fashion and stuff? And I was like, I suppose…” Lara found herself in Boston reporting on a fashion show.

Following her first foray into fashion journalism, Lara began covering fashion for a local newspaper in Boston and then LA, where she also worked as a film critic. Lara applied her sense of humor and perspective to these assignments, as well:

“Everybody wanted to go see the best movies so they could write these sweeping wonderful reviews… I was always like, no, send me to the one you know you have to review that nobody wants to go see. Which is how, you know, my absolutely stunning review of Timecop came to exist.”

Lara then relocated to Williamsburg where she worked as the editor in chief of a fashion magazine that focused on trade:

“I was writing about the business of it—so textiles, and how different denim mills were working on fashion or, you know, what was happening in the streetwear industry.”

She also co-authored The Girlshop Guide to NYC, a shopping guide to New York City:

“These were our favorite very, very, very hand-picked stores…we were never trying to be comprehensive. It was never about that. It wasn't like I'm going to list every bar in New York City. I'm just going to tell you about the three bars that I think are cool.”

Lara continues her work as a journalist now. She is a regular contributor for American Libraries Magazine where she investigates issues that affect society:

“I just filed a story for American Libraries about period (menstruation) equity and period poverty and how libraries are working to provide free period products across the country,” Lara says. “I love talking to people who are trying to make a positive change in the world, but also then talking to people who are like, yeah, but here's why that's a problem… I want, if somebody reads this, to understand the entirety of the issue, to understand that it turns out that period products aren't free because men don't understand periods and men are in charge of almost all the funding everywhere in libraries, in the government.”

Lara’s journalistic interests and publications are wide, but she does not limit herself to a single form of writing. “I've been writing songs for as long as I've been alive,” Lara says.

She is also the talent booker for the Free Music Fridays series at the American Folk Art Museum, which has featured musicians such as Marc Delgado and Lizzie No.

As a teacher, Lara offers a highlights the importance of inclusivity in her classroom:

“I think that you can't do journalism unless you understand the world a little bit, and so for instance, it's important to have students' perspectives from places that aren't just the city, places that aren't just the United States,” says Lara, reflecting on the shift from in-person classes to Zoom. “We should be making this as accessible as possible. And I think Zoom is a great step.”