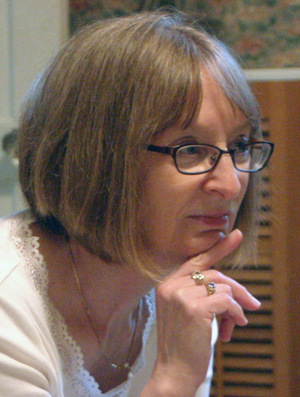 Gotham teacher Leigh Michaels wrote her first romance novel when she was fourteen-years-old. “What I knew about love and relationships back then could have fit on a postage stamp—and have room for the grocery list,” she says. Today, Leigh has more than 35 million copies of her romance novels in print, in 120 countries, in 25 languages.

And yet, a reporter from her alma mater once asked Leigh if she considered writing romance novels a waste of her life and talents. (Leigh was an honors journalism student at Drake University.) Leigh responded, “I received a letter from a hospice nurse about how she loved reading my books because they’re a relief from what she does at work. Another woman who read my books while her father was dying in the hospital told me, ‘It’s like your arms came out and hugged me.’ Another woman may be alive because she picked up one of my books—she realized she was being poisoned by the carbon monoxide from her furnace, like one of my heroines! So, no I don’t consider it a waste of a life.”

On a related note, even many readers of romance assume that because the novels are light and easy to read, they must be easy to write. But Leigh debunks that myth: “They’re actually very tightly written. They’re so focused on the hero and heroine, so there’s no room for wandering off or secondary character subplots.”

Furthermore, because romance is what Leigh calls “a very specific genre,” it’s important to learn the fundamentals of the craft. Some writers think that just because they understand the basics of fiction they’ll be able to write a successful romance. Not necessarily. “The danger,” Leigh says, “is that you can write something that falls in between a traditional literary novel and a romance novel and then it can’t find a home anywhere.”

In addition to her many novels, Leigh has written three books on craft: On Writing Romance, Creating Romantic Characters, and Writing Between the Sexes. The latter serves as a how-to guide using gender differences to create believable characters. “When we write, it’s natural to do it from our own perspective,” says Leigh, “so we don’t always write realistic men.” (And she confirms this goes both ways—there are male writers out there writing unrealistic female characters as well.)

She even teaches seminars on gender differences, which, as Leigh describes it, is really an opportunity to talk about people—why we behave the way we do—and how to apply those behaviors to writing.

Leigh says she teaches for two reasons: to foster a writing community and to give back to newer writers. “When I started, there was no one out there to help me,” Leigh explains. “When I submitted my first manuscript, I consulted Writer’s Market [an annual directory for writers] and did what I thought I should do, but I sent all the wrong things. I feel an obligation to help others and let them know what they need to do. I learned how to do it the hard way.”

More than thirty years since the publication of her first book, Leigh is churning out new stories—whether in the form of a traditional novel or short story e-book, set in contemporary America or the Regency period in England. Her most recent book was released earlier this summer as part of a fifteen-author box set called Magical Weddings.

“People think all romance novels are the same,” Leigh says. “But every journey is different: the problems the characters overcome, the negotiations they make.” And, she adds, “That happy ending has to be satisfying, convincing, and earned.”