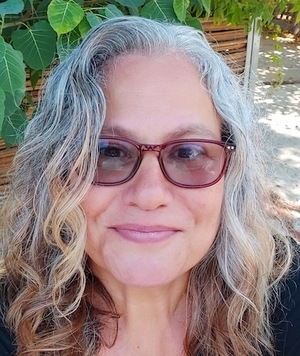 In 2002, online Gotham teacher Lisa Kaufman was at the crossroads of an intercontinental romance.

She was a recent Columbia graduate writing a feature screenplay in LA. Her soon-to-be husband was a business owner in Tel Aviv. “We had been corresponding by email for six months,” she says, “and we were kind of like, what is this thing?”

“This thing” turned out to be the start of a new life for Lisa. Halfway across the world, in Israel.

The flourishing film scene in Israel and Lisa’s creativity were a superb match. Along with teaching online classes at Gotham, Lisa found work in Israel as a screenwriter, translator, and story editor. She co-wrote a TV drama called In the Prime of Her Life, an adaptation of a canonical tale by SY Agnon, who’s kind of like the Israeli version of Shakespeare. Later, she wrote an animated feature film, Baldy Heights, adapted from a bestselling children’s book. The movie is a metaphor for conflict explored through a forbidden romance between teenagers in a town where all of the residents are bald. It’s currently in pre-production.

The life of an expat has had its high points and its challenges. A continuing source of personal frustration for Lisa is the language barrier. Growing up, Lisa had attended a Jewish high school in Long Island where she learned how to speak Hebrew. But her grasp of writing in the language remains limited.

“It’s been a challenge to figure out how to integrate into the film scene as a non-native,” Lisa says. But Lisa has learned to navigate this well. When she’s collaborating with a writer on a story, Lisa will often write notes in English, then discuss them over the phone or in person, in Hebrew.

The language barrier has even played to her advantage at times, mostly when she’s translating for Israeli writers who pitch scripts overseas to international and American producers.

Lisa says that her confidence as a writer has grown since the big move fourteen years ago. “When someone is going through a time when they don’t feel creative or they’re feeling blocked, they think, oh, I’m done. I’m out of story ideas. But I’ve become more comfortable with the idea that we have creative phases. It takes time for the subconscious to solve writing problems.”

And as for her marriage? So far happily ever after, living in a suburb of Tel Aviv with their two boys.