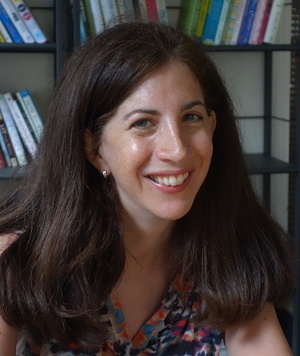 Let’s play a game. Think of a recent movie star, any movie star. Say their name quietly in your head. Got it? Good.

Well, chances are high that Gotham Blog Writing teacher Mara Reinstein has had lunch, or at least a phone interview with your pick. Were you thinking Emma Stone? Check. Jake Gyllenhaal? Check. Jennifer Lopez? Yep. Rachel McAdams, Scarlett Johansson, and Beyoncé? Yes, yes, and yes, we know she’s not a movie star, but Mara has even interviewed Queen Bey.

For Mara, that’s just the life of an entertainment journalist. “I don’t get that excited about it. They’re trying to promote their movie and I’m interviewing them, fine.” There have been a few interviewees that Mara found particularly exciting, like a recent lunch with Robert Redford and Sissy Spacek and the interview with Steve Martin and Martin Short. This category of celebrity she calls legends.

So how did Mara get into the biz of lunching with legends? She started young. She claims that writing was the only subject in school that she was really good at. “I wasn’t just okay at the other subjects, I was flat out bad,” she recalls. At fifteen, she landed the job of Teen Movie Critic for the Detroit News and was sold on journalism.

After graduating from the renowned Journalism School at The University of Missouri, Mara dashed off to NYC. “It was back in the late 90’s when it was still cool to work on a magazine,” she says with a laugh. Her first gig was at a television trade magazine. Next, she went to Teen People and from there was recruited by US Weekly. Mara was in-house at US for years and made her way up the ranks. “I was a staff writer, I was a features writer, I was the deputy editor…I was everything there,” she says. That was until 2017 when ownership changed hands and the entire senior staff got the boot.

Not knowing what to do with her time, and missing reviewing movies, Mara created her own blog Mara Movies. “Before I started getting really busy with other assignments, I would blog almost every day,” she says. She was excited because people, including editors, were reading her reviews and loving them. Those editors began reaching out to her with work. US even asked her to come back as their Movie Critic, which she continues to do today along with writing for numerous other entertainment outlets and teaching for Gotham.

A typical day for Mara goes like this: exercise, interview, movie, write. Today she was supposed to go to two screenings but blew off the first, a ten AM in Times Square. “I went running instead,” she says, “and then I got a manicure. But after I hang up with you, my day really begins.” She has an interview, another screening (one that she’ll actually go to), and then back home to write.

Mara does have one yearly escape from her star-saturated, world. She’s been going to the set of Survivor since 2004. “It sounds insane and if you knew me you you’d know I didn’t like summer camp, I don’t like getting dirty, I have to stay at a five-star hotel.” During her yearly sojourn, aside from being a fly on the wall for the first few days of production, the press is invited to run an Immunity Challenge, which is an elaborate obstacle course. “It’s really nerve-racking and I have a heart attack before I do it. It’s really fun.” It must be, as Mara has done it fifteen times now. Twice, she’s gone right after the polar opposite event: the luxurious Cannes Film Festival.

Of all the celebrities that Mara’s interviewed, only one has ever really impressed her father: Dick Van Dyke. “I don’t think my dad was ever so excited about an interview,” she recalls, “He was like, I have questions that I want you to ask him—he’s never done that before. He has never given me questions to ask Will Ferrell.”