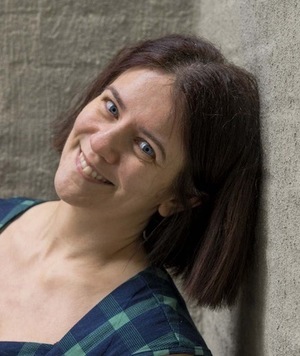 Several years ago, Gotham teacher Marie Carter moved from Scotland to the US to begin her dream job at Hanging Loose Press. Since her days at the University of Edinburgh, Marie longed to work for the indie publisher, first captivated by one of their books—a poetry collection by Sherman Alexie.

What Marie didn’t anticipate is that she would also become a trapeze artist.

Just before she was set to move, Marie’s father died suddenly of a heart attack. She was thrust into a whole new country and culture after this disorienting event. “I was left with all this intense grief and not sure what to do with it,” Marie says. “It’s hard to describe, but the trapeze helped me confront fear, which helped me confront my grief and my fear of death.”

Through this untraditional healing process, Marie not only learned to grieve, but wrote a memoir from her experience called The Trapeze Diaries.

About three months into her trapeze journey, Marie began cross-training with yoga and developing a whole new relationship with her body. In fact, one of Marie’s yoga instructors inspired her so much that Marie decided to train as a yoga teacher. “One of my teachers taught me a lot about staying neutral and calm in the classroom,” Marie says. “She was able to accept all the different personalities in the room and be compassionate.” Marie’s experience teaching on the yoga mat actually helped her later when she started teaching writing classes.

Though her job with Hanging Loose was only temporary, the editors liked her so much, they helped Marie obtain her first VISA to stay in the US. When she eventually applied for her Green Card, to keep living and working in America, Marie had to prove “extraordinary ability” as a writer. In fact, “aliens with extraordinary ability” was listed in the approval notice from the Department of Immigration.

Always one to seize an opportunity, Marie now works for the lawyer who helped her immigrate to the US. She writes cases and collects letters of support, enabling immigrants to stay in the country. Between the US and Scotland, Marie doesn’t hold a strong loyalty to either country, but she says, “I do feel connected to New York. It’s an amalgamation of people, a hodge-podge, which is how I feel as a person.”

Though she’s not swinging from a trapeze these days, Marie is still testing her physical boundaries. She practices aerial yoga and has successfully ridden a “German wheel” (a cage-like metallic wheel that holds the rider in place with straps). Someday, Marie would like to attempt tightrope waking, in part inspired by Phillippe Petit, the notorious Frenchman who once tightrope-walked between the World Trade Towers. She says, “He gave the buildings humanity. He describes them with a lot of soul, like how they’re sleeping or crying. He’s very poetic.”

Fittingly, one of her favorite spots in the city is the Woolworth building where she has viewed the awe-inspiring construction of the new World Trade Center from her employer’s 20th floor office. And, cementing her relationship with her new country, Marie is working on a novel about New York City.