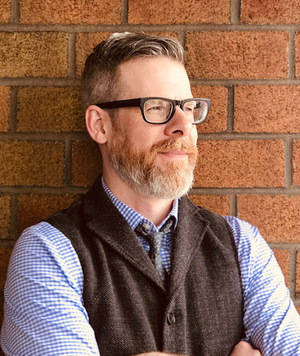 Gotham teacher Matthew Cody had little desire to pick up a book until his older brother  introduced him to the colorful world of comic books, which became a gateway into the world of novels. Always eager to spend time with his brother, Matthew would listen to him read old science-fiction paperbacks, such as the John Carter of Mars series by Edgar Rice Burroughs. In the middle of their storytelling sessions, his brother would ask if he wanted to hear more. When Matthew would inevitably reply “yes,” his brother would hand him the book and send him off to finish reading it himself.

Fast-forward to adulthood—Matthew is now a successful children’s book author/teacher and father with a kid of his own. Formerly a ‘reluctant reader,’ Matthew says, “I’m essentially trying to achieve that hard-to-put-down novel for the ten-year-old boy.” Matthew hopes his stories will get kids to set down the video game and start turning the pages.

For inspiration, Matthew has turned to his boyhood influences. His first novel Powerless has roots in his early superhero comic book reading, while his new book The Dead Gentleman comes from the alternate realities of steampunk fiction. (Steampunk is a subgenre of science fiction/fantasy that involves a setting in which steam power is still widely used, often in Victorian era Britain; as Matthew puts it, these stories re-imagine what the future would have looked like through Victorian-era eyes.) Matthew calls Powerless a sort of “serialized novel,” structured similarly to the pulp fiction of the early twentieth century. Each chapter has its own arc while simultaneously propelling the reader forward to the next.

Naturally it’s a lot easier to come up with ideas when your kid comes home from preschool wanting to play dragons and mud monsters, Matthew observes. And before he had a kid of his own, Matthew got to work with kids when visiting schools to read his work. “You get a chance to really interact with them,” Matthew says. “It’s not enough to just remember how you felt as a kid. You can get lost in the sort of rose-colored glasses of our childhood and what we assume children want. The way you remember it is not necessarily the way it is.”

In addition to Matthew’s school visits, he is also involved with a book club summer camp organized by Symphony Space in Manhattan. Kids get to spend a day with a professional author and partake in creative writing activities. And a school in New Jersey featured Powerless as their “One Book, One School” book for middle grade students. (A national program, “One Book, One School” engages the entire academic community—students, teachers, and parents by having them participate in a shared reading experience.) As Matthew addressed an auditorium of 500 guests, with the school decked out in superhero regalia, he knew Powerless had clearly packed a punch.

When asked what he hopes his own son will read, Matthew has a “no pressure” policy. “He’ll be ready to read whatever he’s ready to read.” Laughing, he adds, “He’ll probably love my books at first and then he’ll want nothing to do with them.” But if anyone can inspire the inner avid reader to emerge—think Clark Kent transforming into Superman—it’s super-author Matthew Cody.