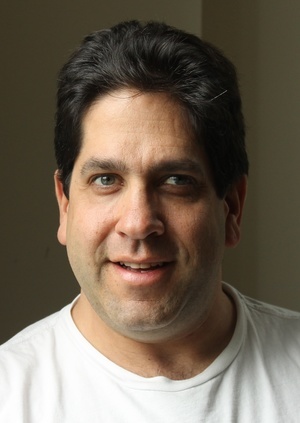 “Poetry is about sustaining a piece of my existence in the world. It’s about survival,” says Gotham teacher Matthew Lippman. “I do it like I do anything else in my day. It calms me down. It’s like prayer and making a sandwich at the same time.”

For Matthew, writing is on par with eating or drinking or sleeping; it’s circadian—and it has been since he was just 15 years old. “I remember being really in love with language,” he says. “I was on a Greyhound bus going to summer camp. My friend Peter and I were sitting in the back and he was really interested in language and the two of us were like, ‘You know what? Let’s write poems every day.’ So we did that. And I never stopped.”

Today, a father and an 11th and 12th grade teacher, Matthew finds the time to write in the hour before classes begin at Beaver Country Day School in Chestnut Hill, Massachusetts, near Boston. “It’s quiet here,” he says. “The grounds, the facility and the windows are lovely.”

“I write very quickly and I write a lot,” admits Matthew, who rarely gets stuck on a poem. If a poem hiccups and comes to a halt before it is complete, he moves on without much hesitation. “I have a lot of poems but a lot of them aren’t really worthy of anything other than the fact that I had a good time writing them.” What’s important, to Matthew, is simply “being in the river.”

And the river? Where is it? How does he get there? Matthew says listening to music has always been his way in. “It gets me in a headspace to make a poem,” he continues. “And it’s all about getting into a space, a groove, a vibe.” Matthew believes he fell in love with language through hearing the music of Bob Dylan, Joan Baez, and hanging out with his friends. “I grew up in New York City in the ‘70s and I just loved the way me and my friends talked—all the slang that we used. I remember hanging out in the street, listening to the older kids, the rhythm… I was really fascinated by all that.”

Matthew has published six poetry collections, most recently Mesmerizingly Sadly Beautiful. His first collection, The New Year of Yellow, he says, “was a mess of poems from a twenty-year period.” “I couldn’t get that book published for like 14 years after I left graduate school.” His wife suggested that he reorganize and place the funnier and stronger poems at the beginning of the collection. He took her advice.

The summer before Matthew started sending out the manuscript to contests, he discovered the poet Tony Hoagland. “There was something simpatico between his work and what I was doing—and I noticed he was a judge for a contest, the Sarabande Books Kathryn A. Morton Prize in Poetry. I thought, Maybe it will get to him and maybe he will feel the simpatico that I feel,” recalls Matthew. He won that prize. A few days later, Matthew learned that he’d won another first-book contest through the Association of Writers & Writing Programs. “After 14 years of nothing,” he says. “For about a week I was like, ‘I’m the baddest poet in the land.’ That dissolved quick—but it was fun for a week.”

Though a lot has changed—from running amuck in the streets of ‘70s New York to summer camp in Vermont to snowy views from his office desk in Chestnut Hill—Matthew affirms that poetry has remained constant. “The first person that I write to is myself, to satisfy whatever it is I need to get out, but I teach high school students,” he adds. “I’ve always been very concerned with them as an audience.” His students are about the age that he was when he seriously dedicated himself to writing.

“You remember 15?” he asks. “I was in love with everybody and everything.” “I didn’t know what to do with all that love,” he says. “Writing helped me withstand what that 15-year-old love was.”