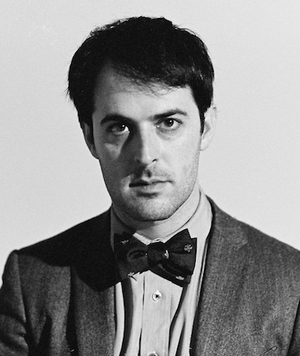 The most pivotal moment in Gotham teacher Michael Leviton’s life was when he started playing the ukulele twelve years ago.  He and his friends were playing music on a beach in Southern California, where Michael was raised, when they decided they should have a ukulele in their band. Despite not knowing how to play, Michael jumped in and said yes. (He taught himself how to play guitar as a teenager, but had no musical training.) Michael was able to train his ear and help the band make up ocean-themed songs, inspired by their love of the Beach Boys.

It was that spontaneous decision that set Michael off on a whimsical journey as an artist of all trades in New York.

When Michael first arrived in the city, he went to an open mike night at Sidewalk Café on Avenue A, a classic East Village spot. He was invited to play ukulele with a band and ended up meeting the  soon-to-be discovered musicians, Regina Specktor and Nelly McKay, along with the band, the Moldy Peaches. It was quite a surreptitious introduction to the night life of New York, one that Michael writes about in the New York Times Modern Love column, “Speaking at Arm’s Length With Music.” “I saw great musicians, got to become friends with them, and play my own shows!” he says. What’s not to love?

Turns out the drummer of the band he played with was Maggie Miller—an editor at Harper Collins who eventually taught Michael how to write picture books. He ended up ghostwriting three celebrity picture books. (Which celebrities we can only guess…) Some time later, Maggie and Michael were ghostwriting a children’s book about Halloween. Joking around, they came up with the silly notion of including a “free ghost inside” each book, but instead of a plush toy, there would be nothing. (The joke being that you can’t actually see a ghost.) . “Kids are ironic and funny…they’re like hipsters in their sense of humor,” Michael says. “They would see the sham.”

And thus, the idea for My First Ghost, Michael and Maggie’s picture book, was born. The fun challenge was coming up with activities for a kid and his ghost to do. For example, the kid and his ghost could share a milkshake, but instead of illustrating the pair together, the illustration would show only the kid with two straws. Michael says, “My book is completely ironic—you can’t go play hide and seek with your ghost.” Indeed—how would you be able to find a ghost?

Michael has also written an as-yet unpublished family memoir as well as a screenplay for RKO Pictures. And in addition to teaching at Gotham, Michael teaches private music lessons—both guitar and ukulele, of course. When he’s not teaching, you might find him playing the keyboard at The Leadbelly bar on Orchard Street.

Michael admits to his students, "It’s hard for me to do anything I find annoying.” So, he doesn’t. His stance is if you’re not making a lot of money and you’re having a bad time, go do something you’ll actually enjoy.

More recently, Michael has been exploring photography, taking digital portraits.  It seems there is no shortage of artistic endeavors for him to get into. Michael has only one stipulation—he wants to make stuff.