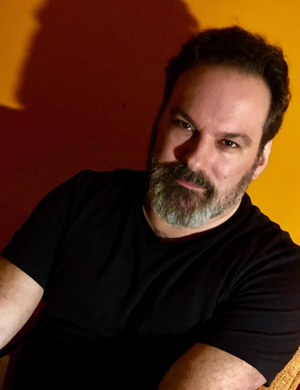 
Gotham Poetry teacher Michael Montlack doesn’t like to be pinned down, with his art or anything else. After a relatively conventional life in Long Island, Michael made his first move when he went to graduate school in San Francisco. He studied fiction, but wrote poems on the side, calling the poems, “a dirty little secret.”

The poems weren’t the only secret to be shed.  “I was coming out at that time,” Michael says, “really coming into myself. I felt a sense of renewal—life was just beginning for me. I was traveling for the first time, making friends. Being in the closet, I felt like I hadn’t lived yet.”

Michael eventually returned east, living in New York City,  working for a literary agent and teaching, but still finding time to write. And he found himself returning to his secret passion for poetry, liking its brevity. “Fiction is chronic,” Michael says. “Poetry is acute.” He decided to pursue another graduate degree, this time in poetry.

Michael, however, was in no rush to finish his evolving as an artist. He observes, “I saw that writers don’t necessarily mature until they’re older. We’re not dancers. We don’t have to make it by the time we’re 20.” And he felt no need to designate a permanent location, dividing his time between New York, his “wife” and San Francisco, his “mistress.” Michael says, “New York is really what I know, but San Francisco is romantic and sexy…but you can’t leave your wife for your mistress.”

You might say Stevie Nicks brought Michael to his next step—essays. Michael always thought the legendary singer from Fleetwood Mac was beautiful and other-worldly, as he puts it, “like a fairy godmother.” When Michael first came out in his early 20s, he started asking his friends questions about other gay icons. What’s the whole Judy Garland thing about? Why do you love Annie Lennox? He felt compelled to write a poem about Stevie Nicks.

All this rumination gave birth to an anthology of essays: My Diva: 65 Gay Men on the Women Who Inspire Them. The book, which Michael edited, offers insightful and witty essays on such diverse divas as Elizabeth Taylor, Bette Midler, and Princess Leia.

Writers contributed from all over the United States, Canada, and beyond, making the Diva book a true community project. “I started branching out,” Michael says. “I had forty contributors from email alone. I wanted people to tell us their stories, to make the stereotype much more multi-dimensional.” Word of mouth (and good reviews) spread quickly upon the book’s release. Soon there is to be a sequel of sorts, Divining Divas, an anthology of poetry about divas.

Michael encourages his students to establish a sense of community as well, even in an online setting. Michael assigns a collaborative project in his classes, and says he still receives emails from students who eventually meet and continue to work together.

Now, Michael has taken yet another road in the literary landscape—he is finishing work on his first young adult novel. And, of course, he is still a devotee of verse. This spring, Michael will see the debut of his first full-length poetry collection, Cool Limbo.