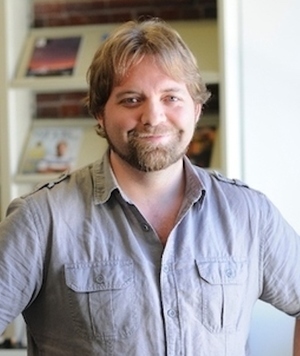 Here’s a good one:

How did the Cliff Notes-reading teen who chose his higher education destination based on a good-looking woman behind the table at a college fair transform into a professional writer?

The answer: He literally had to travel the world.

The teen in question was Mike Dunphy, twentyish years ago.

The first thing he says to me when we meet is, “I’ve been trying to decide what I’m going to do with my life.” Although he’s got some things figured out, such as how to consistently receive rave reviews from his Creative Nonfiction 101 and Article Writing students, and how to travel to Miami in the dead of winter and stay at luxury hotels all on someone else’s dime. The fine details like what state or country to call home are a little harder for him to pin down.

But he’s never really been in a rush to figure it out. Maybe that’s because he grew up in Vermont, with the forest as his playground. As a kid Mike did well in school. Except for that one time he had to repeat 3rd grade, which he still finds hilarious. “How mature do you need to be to pass 3rd grade? I was not that mature,” he says and then adds, “And a lot of my family would agree that I’m still not.”

As mentioned earlier, he was not interested in school and since he went to a Catholic one, creativity was not encouraged, so he wasn’t writing or seeking out books. But then something happened. A teacher gave him Flannery O’Connor’s “A Good Man is Hard to Find” and everything changed. “I remember reading that and being completely blown away that anything could be this cool in a short story.” After that he started digging further into literature until one day he found himself writing his very own bad poetry.

From there he went on to spend the last year of college studying literature in Canterbury England. “That was a really amazing, unbelievable experience,” he says. “Especially coming from Vermont. It was like I was living in literature.”

After that year in England, Mike returned to the States with one thought, “How the hell can I get out of this country again?” He saw his answer in the form of the Peace Corps and moved to Estonia to teach English. Coming from a family of teachers, he was a natural.

After eight years of teaching ESL and working odd jobs in Estonia, Italy, Prague, Slovenia, and Turkey, Mike decided it was time for a career change. He wanted to do something creative with his life. “All of the people that I respect most in this world are artists and creators,” he says, and adds, “I can’t paint anything, I don’t have drawing abilities, I can’t sculpt, I can’t make anything, but the one thing I could do is write.”

While living in Istanbul, Mike stumbled upon his chance to do just that when he arrived at an interview for Time Out Istanbul and discovered that the editor went to his high school. After writing articles for Time Out, he decided to take the plunge and really go all in. He headed back to the States to earn his MA in Writing and Publishing from Emerson College.

Today, while the rest of us are suffering our staid, non-globetrotting lives, Mike is being flown around the world to destinations such as Wales, Jamaica, Estonia, Austria, Costa Rica, Amsterdam, Berlin, Dubai, Portugal, and Thailand—to write.