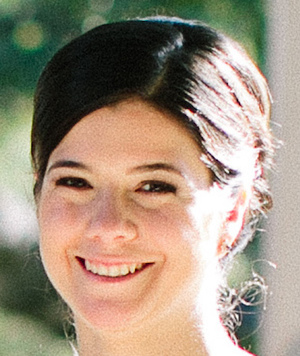 “I have a very vivid memory of when I first knew I wanted to write,” Miriam says. Her mother was having a baby and Miriam was not thrilled.

“I was very upset and anxious and angry about the fact that my mom was having another baby. He's the fourth child. He was born and I went to see him in the hospital and fell in love, and so I wrote a short story about it…I remember I gave it to my grandfather as a birthday present.”

Miriam continued her writing career as the editorial page editor for Columbia University’s independent newspaper, the Columbia Daily Spectator. From there, she wrote for publications including The Daily Beast, New York Magazine and Brides, where she reported primarily in the entertainment sector. “When Twitter was first taking off, I did a piece for Los Angeles magazine about show runners on Twitter and how they were connecting directly with audiences that way, featuring Shonda Rhimes and Bill Lawrence, and that was really fun and also hilarious in retrospect, because, like, who woulda thunk? It was such a think piece about how Twitter was breaking down communication between stars and showrunners and fans, and now look where we are.” Miriam also worked in tech marketing before making a change in her writing career.

“I was working on my memoir, and then I moved to LA for my husband to go to film school, and I got really into the idea of TV writing and started doing it.”

It was here that she discovered her talent as a TV writer after connecting with Josh Schwartz’s assistant and being hired to work as a showrunner’s assistant. Over the next five years, Miriam worked on several shows including The Carrie Diaries (the prequel to Sex and the City) and Speechless, a show lead by Minnie Driver.

Miriam’s writing process has been influenced by her work in television—she emphasizes the importance of planning and includes her whiteboard among her favorite writing tools.

“I am very heavy on prep work, like, to the point that by the time I actually sit down to write, the writing comes fairly easily because I do so much outlining and beat sheets and character sketches.”

Connection is also important in Miriam’s writing life. “TV is a very collaborative process. You're in a writers’ room, and even though you go off and write your outline, you write your script, it comes back into the room, and we all work on it together. All the brainstorming happens together. It's a very external experience.”

This attitude of writing as collaboration extends to her teaching. She brings the energy of a writers’ room to her classes—literally. “We spent an hour and a half each class just doing a writers’ room and getting to see everybody bouncing off each other and helping each other's scripts by treating it as if it was in a writers room was really fun,” Miriam said about the TV Writing Master Class she taught last summer.

Miriam now lives in the East Village where she’s hard at work on her memoir which she describes as a project that’s “evolved as life has evolved.” Miriam has an ability to balance the ethereal, difficult-to-define aspects of writing with the practical, and her writing advice reflects this. “You have to be patient with yourself,” she says. Also: “Create playlists that are specific to what you’re writing, and only listen to those playlists when you’re writing.”