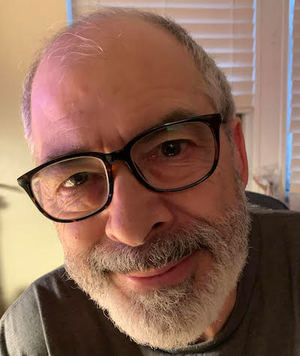 Gotham teacher Mo Krochmal is a self-proclaimed hybrid: a combination of old-school journalism chops with the digital savvy of a Millennial.

He founded the consultancy/strategy firm, Social Media News NY in 2011, with the intention that it would exist solely on Facebook. But, Mo points out, “As we all know, the rules of Facebook have drastically changed in that short amount of time.” The company no longer shows all of an individual’s or organization’s posts to all of his or her friends or followers. Once that happened, Mo built a website to compensate. Today, socialmedianynews.com constantly imports from various social media channels—Facebook, Twitter, Tumblr, and Flipboard, to name a few. And the most impressive part? Mo maintains the site by himself.

Back in his humble beginnings, Mo worked as a sports editor for a small newspaper with a circulation of about 10,000. “You’d watch someone’s kid’s football game on Friday night, report it, and then hear about what should be changed in the article on Saturday from the town. It was real community reporting,” Mo says. “And,” he jokes, “it made you remember everyone’s name!”

He had decided from an early age that he wanted to move to New York City, although Mo had grown up all around the world. He was born in Afghanistan where his father had taken a job. Later, the family moved to North Carolina, Honduras, the Virgin Islands, Kentucky, and finally back to North Carolina.

So off to the Big Apple Mo went, prepared to study journalism and new media at Columbia University’s master’s program. His timing couldn’t have been more perfect: Mo entered graduate school on the cusp of traditional journalism’s transformation into the digital age. His professors placed a great amount of importance on using the Internet, digital photography, and video to report the news.

Mo eventually became an original producer of nytimes.com at The New York Times. While it was a valiant step in the right direction, Mo says, “The Times wasn’t quite ready to report using the new digital tools. So, I got to do technology reporting, write about the Internet. Then, the dot com crash happened, then 9/11 happened.”

The day after 9/11, Mo walked from his home on 15th Street and 6th Avenue to the local Salvation Army headquarters and asked how he could help. Given his experience in digital journalism, Mo found himself creating ID cards—credentials of sorts—for volunteers to work at Ground Zero. “We would take color copies of their drivers’ licenses,” he says, “then add the Salvation Army logo and put the whole thing on a chain so they could wear them like tags around their necks.”

“Like everyone else who was in the city during that time, 9/11 changed things drastically for me,” Mo says. “I decided I wanted to be able to teach people how to do what I did, not just do it.” And he’s been doing just that ever since. Today, he teaches Creative Nonfiction 101, Business Writing, and Social Media Writing at Gotham.

With so many platforms and channels to choose from, navigating the social media world can be daunting. Mo uses all of these outlets, so, as he says, “My students don’t have to.” That way, he can help each person find what works best for him or her. But the very first lesson of Mo’s Social Media One-day Intensive is Me, i.e., Who am I?  “I ask students to think about themselves in terms of a car, to understand a bit about branding,” he says. “I tell them I think of myself as a Ford F-150 XT with luxury interior that seats four.”