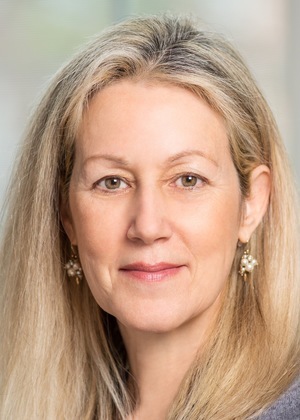 “For a long time I was a painter who wrote,” says Gotham TV and Screenwriting teacher Pamela Harris. “Now I see myself more as a writer who paints.”

Growing up, she was just a kid who loved movies. In her early teenage years, she and her girlfriends would ride their bikes over the back hump of the local drive-in and watch horror films for free. “That’s where I learned the power of the image,” she says of watching Jaws two stories high. She lived in a quaint and quiet New England town that did not encourage feelings. “At the drive in I could scream my head off and really feel scared shitless.”

At that point Pamela decided she wanted to make movies. “I just had no idea what that would mean or how one could even do that.”

Pamela went to an alternative high school—“for smart kids who were fuck-ups”—and connected with a teacher who prescribed her a reading list. She discovered she loved escaping in these library books. She would sit outside chain-smoking cigarettes and chain-reading. Although she loved to read, she one hundred percent did not want to be a writer. “I had two uncles who were writers and one was crazier than the next,” she says, which is as good a reason as any for a stubborn fifteen-year-old to not like something.

Books sent her to college as an English major but six weeks in she wandered into the Hartford Art School. “I wanted to just roam through because I had never seen contemporary art before. I didn’t know what I was looking at but it made perfect sense to me.” She begged the dean to let her in, and he did.

After graduating, Pamela moved to NYC. “I did that hustle that you do in New York when you’re a zygote,” she says. She worked on her art in the day and walked around late at night, photographing film sets that she stumbled upon, drawn in by the artificial lighting. She realized she wanted more than to just photograph the sets, she wanted to be part of them. “I went to the production manager and said I can make anything out of duct tape and string.”

She started crewing and she also started having some success as an artist. While getting ready for her first solo show, a heat wave settled on the city. “I couldn’t varnish the paintings for two weeks so I sat down and banged out the first draft of a screenplay,” she says. “At the time, I barely knew what a screenplay looked like.” She let a show-runner friend read her script. He said it was a mess but he also told her that there was a kernel of something in there that he’d never read before. “That little bit gave me so much hope and determination,” she says.

Galleries were able to sell one or two of Pamela’s drawings a month and that’s how she made her living. But then, September 11th happened. “There was a real sort of seismic shift and I started to shift and that’s when words became easier for me to put together. There was comfort on the page.”

The same show-runner who read her script also gave her the best advice she ever got: before you can find success as a writer you need to put in your 10,000 hours. Galleries started crumbling and Pamela started hacking away at her 10,000. She had read some student MFA scripts and word got around that she gave great feedback, and suddenly she was being sought out to read features.

Around this time, she also started teaching at Gotham. “I teach no matter how busy I am or how secure I feel. It’s just a constant low-level sense of here I am in the world with other writers.”

Pamela has been focusing on writing screenplays and television shows for over fifteen years now and has gone through successes, let downs, and near misses. Lately, she’s been on the upswing. In September of 2017 she was chosen for the Meryl Streep and Oprah Winfrey-funded Writers Lab. “It really changed a lot of things in my life,’ she says. “They just really believe in women’s voices, so hallelujah.”

When Pamela isn’t putting in her writing hours or juggling the handful of projects she has going on at all times, you can find her at the wee hours of the morning, throwing the ball for her dog and singing into the voice recorder on her phone, because her next project… it’s a musical.