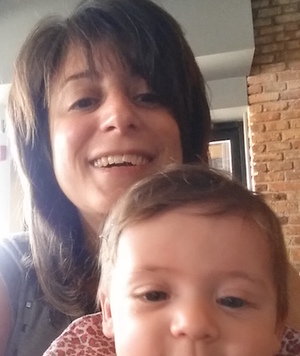 Gotham Article Writing teacher Patty Lamberti grew up in an Italian household where showing love meant shoving food down each other’s throats. Today, Patty loves writing about food, an interest she undoubtedly picked up from her parents. She has contributed to the online blog of Food Network star Guy Fieri, in addition to maintaining her own food blog. But Patty’s interests are not simply confined to slicing and dicing. She has discovered that life is all about mixing ingredients.

Patty has worked as an editor and writer for Playboy (for the political wing of the publication known as “the forum”). She quickly became adept to an environment where sex was the number one topic. Plus, it helped that there were a lot of women on the Playboy staff and the men were always professional. Patty happily recalls a story she once wrote about a new line of colognes infused with human pheromones, designed to attract the opposite sex. As any good journalist would do, she sampled the merchandise in order to write a more thoughtful article. “In one case, a woman hit on me,” she laughs. “At least, she offered me her seat.”

In addition to teaching online at Gotham, Patty teaches journalism “live” at Loyola University in Chicago. Before she started teaching online, Patty taught a couple of Gotham classes in New York. She realized she had found her passion, so she set out to find a full-time teaching gig which landed her at the university.

It took five years for Patty to “get over” New York, but she says the move to the Midwest has been worth it. And even though her mother once objected to Patty posting some of the family’s secret recipes online, Patty is happy to be closer to her family. (While good food is a huge source of Italian pride, it’s fairly well-known that you don’t give away the ingredients.) When she’s not teaching or writing, Patty enjoys making a simple meat sauce and sharing her love of cooking with her New York Times recipe-clipping husband.

At Loyola, Patty says technology has pushed itself more and more into the forefront of the classroom. Luckily, she has managed to change with the times. Her tech-savvy has landed Patty good freelance work as well as her full-time teaching job. Patty understands the difference between what people want online versus in print—information is presented differently. She advises, “Write half as much as you think is right. Writing shorter is harder, but necessary. Long is not always better. The world is different now. People are much more distracted.”

Patty has also studied at Gotham in order to write a screenplay. Even though it’s been on again/off again process, Patty maintains the brain exercise alone is worth it. She jokes, “Writing is a better pastime even if you drop it, even better than say, drinking.” She also had the benefit of observing another Gotham teacher teach online, learning a lot just by reading the teacher’s feedback and parsing through strategies to get students involved and excited. Patty has also been working on an online interactive young adult book—a sort of “Choose Your Own Adventure,” but for the web. “It’s nice to have something that’s not just writing,” Patty says. “I get to use a different part of my brain.”