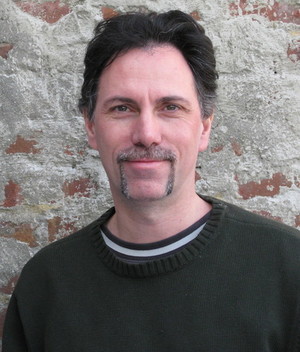 If Gotham teacher Paul Witcover were to choose a profession other than writer, he would want to be a psychoanalyst. “I’m a nosey bastard,” he says. “But every writer has to be nosey to a degree.”

Even nosey about alternate worlds.

A successful science fiction and fantasy writer, Paul’s most recent book, The Emperor of All Things, takes readers through an alternate history around the time of the Seven Years’ War in London. The fantastical ride picks up speed when protagonist Daniel Quare, a journeyman clockmaker, discovers a rare timepiece that is rumored to possess impossible qualities.

Science fiction and fantasy had a strong impact on Paul from an early age. He grew up reading comic books and science fiction authors like Edgar Rice Burrows, Philip K. Dick, and John Brunner. And in the 1980s, Paul worked for DC Comics where he and co-writer Elizabeth Hand wrote the comic Anima. Paul is also a champion of graphic novels saying, “The quality of storytelling is so good. Graphic novels are literature. I’ve taught them right alongside fiction writing and poetry.”

While he is both a devoted reader and writer of science fiction, Paul doesn’t believe in pigeonholing literature. “When I teach, even though the class is technically called ‘science fiction and fantasy,’ I teach it as a speculative fiction class,” he says. “These categories [of fiction genres] are set up more for booksellers and publishers, not readers.”

Besides which, Paul notes how much the genre has changed. “It’s no longer insular,” he says. “Even using the term ‘speculative fiction,’ for example—it’s sort of a way to protest a ghettoization of the genre.” Paul remarks on how science fiction has made its mark on more mainstream writers like Michael Chabon and Cormac McCarthy. And the diversity of authors within the genre has changed, too. “Women and people of color have claimed their rightful place in the field,” he says. “They always had it, of course, but there were so many prejudices working against them that they’ve only recently overcome them.” With so many evolutions, Paul concludes it’s a very exciting time to be a science fiction and fantasy writer.

Currently, Paul is finishing up the sequel to The Emperor of All Things and will soon begin the third book in the series. “I didn’t think it would be a trilogy,” he says. “I thought it was just going to be two books, but then it struck me that I wasn’t going to be able to tie up loose ends. This is my first trilogy!”

Part of the genre’s gravitation toward sequels and trilogies is, as Paul explains, “Because because readers of science fiction are interested in incredibly detailed and complicated worlds. And they enjoy watching those worlds evolve over time. They become more and more immersed in the subtleties of those worlds. ”