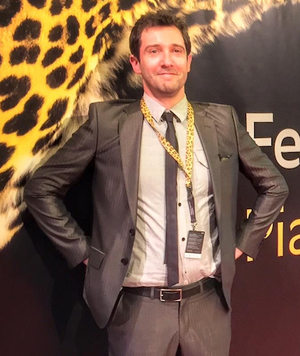 Gotham teacher Raven Burnett pursues both film and theater with obsessive passion. While his training is in film and directing, Raven also co-founded the 48NYC Theater Festival with friend, Glenn Hergenhahn. Raven and Glenn were inspired by several other theater festivals around the country, including the legendary 14/48 Festival in Seattle, WA and Idiom Theater's 48 Hour Theater Festival in Bellingham, WA. “This form of theater,” Raven says, “is essentially writing, producing, and mounting over a dozen new plays in just forty-eight hours. It's insane.”

The way it works is groups of writers, directors, and actors are pre-assigned to collaborate with one another. First, writers draw various themes out of a hat and proceed to write short one-act plays from 8 PM to 8 AM the next morning. After they’ve completed a script, they hand it off their directors and actors who put the show together.

Raven points out the difficulty of breaking into the theater industry, and that the format of 48NYC gives writers, directors, and actors alike a chance to work on several productions in short amount of time.

On the film side of things, you can find The Eel, a screenplay for which Raven developed the story, currently listed on Hollywood’s Blacklist (an official unofficial list of the hottest unproduced screenplays). The film follows an escaped convict who tries to cross the border to Mexico, but before he can do so, he must commit one last crime for a corrupt sheriff in Texas.

“Screenwriting forces me to tap into my weakest self, “Raven says. “I’m very bad with structure, timing, coordinating anything. But the nice thing now is that after writing for so long, I’m the happiest I’ve ever been.”

When asked if he’d ever leave New York for Los Angeles, Raven points out it’s expensive to both leave (and to stay in) New York. “It’s hard to muster enough escape velocity because the place has the gravity of a neutron star!” he says with a laugh. “L.A. is sort of the opposite of New York. It’s more gentle, laid-back.”

In the classroom, Raven likens writing a screenplay without an outline to “trying to run up a wall.” He says, “You can do that for a few paces and then you fall on your ass.”

He also points out that screenwriting has a lot in common with the ancient art of poetry. Both forms concentrate on distillation. Raven says, “They’re about being evocative, not descriptive.” In fact, Raven recommends the epic poem, “War Music” (a modern retelling of Homer’s Iliad by Christopher Logue) to his students each term.  But unlike poetry (or prose), Raven says, “Screenwriting is more like a blueprint for someone else to take and build upon.”

But no matter what you’re hankering to write, Raven invokes the advice of one of his screenwriting professors: “Get obsessed and stay obsessed.”