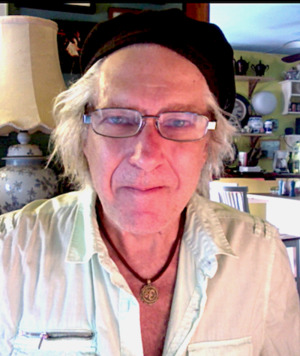 Before Gotham teacher Richard Caliban was known as the Obie Award-winning, prolific director of the Cucaracha Theatre, he was pretty much a “hippie.”

It started with Richard’s unconventional childhood. His father had a job that required frequent relocation, so Richard got to live in Colombia, Costa Rica, Hawaii, Puerto Rico, and Saudi Arabia—all between the ages of six and twenty-one.

In the late 60s, Richard was studying business at Boston University, but he remained gripped by wanderlust. Flunking out, he moved back to Puerto Rico and built a communal house on stilts in the rainforest. “I didn’t know what to do with myself,” Richard admits. “A couple of my friends and I were going to buy a sailboat and sail around the world for the rest of our lives.”

Instead, Richard decided to give school one more try. While he was a student at Bard College, somebody asked him to work lights for a play. On a whim, he agreed, and ended up becoming entranced by the world of theater.

One thing led to another, and after graduating from Bard, Richard moved to New York City to pursue the life of a “floundering actor.” Feeling adventurous, he formed the soon-to-be-famed Cucaracha Theatre in Tribeca with limited funds and no experience running a theatre company.

One night, Richard remembers, one of his theatre’s benefits got on an underground party list. “A thousand people showed up. Limos arrived outside our place and stayed there until like, four in the morning.”

Just like that, Cucaracha became a downtown New York sensation.

“It was a wild ride,” Richard says of Cucaracha’s 13-year run. During his post as artistic director, Richard wrote, directed, and produced over 75 productions, including Homo Sapien Shuffle and MoM: A Rock Concert Musical. Cucaracha also drew countless notable performers, like the Blue Man Group, Paul Giamatti, and Parker Posey.

But Richard’s thirst for adventure never left him. Even during Cucaracha, he agreed to be a guest artist and teach workshops at theatre companies in Budapest and Uzbekistan.

After Cucaracha got priced out, Richard taught at the National Theatre Conservatory in Denver, Colorado and even directed a freewheeling cabaret show called Les Funky Bitches Fantastique.

Still prolific and free-spirited as ever, Richard continues to spit out plays in addition to teaching at Gotham. Most recently, Richard has written two adaptations of operas, inspired, surely, by his earlier globetrotting days: a spin on Carmen set to Brazilian music, plus a Caribbean version of Turandot set in a mythical place called Surf City.