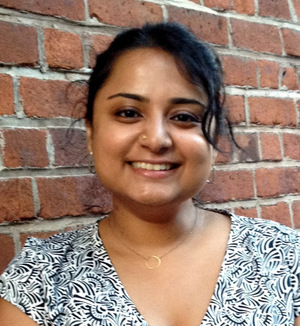 Gotham teacher Roohi Choudhry is a prismatic person. She is neither a left nor right-brain person, but equal parts analytical and creative. She was born in Pakistan, raised in multiple countries in Africa, and now resides in Brooklyn (which she calls Brooklynistan).  And she is not confined to any one literary genre, writing both fiction and nonfiction. In fact, she’s not confined to any one thing, period.

Originally, Roohi moved to the US for graduate school where she studied market research. “I knew I wanted to be a writer,” Roohi says, “but I didn’t think I could do it as a career of any kind. I was good at statistics and logistics and I just ended up in that field.” She took an internship in market research as part of her degree, but later realized she wanted to do something more meaningful, so she switched to social research.

Now Roohi works for the community program arm of a Brooklyn hospital, the main project of which is the Sunset Park Promise Neighborhood, dedicated to improving outcomes for kids in the area. Here Roohi feels she can make a real difference in people’s lives. “I prefer problem-solving and working with people,” she says. “I think about how to collect data to tell stories about what we do.”

Of course, Roohi also tells stories in her writing career. “I like to think of my own writing more as an art form than a vocation,” Roohi says. “When I hear students say they want to make writing their career, I think it just puts so much stress on what is already a difficult journey—learning the craft, finding your voice, etc. And then the end goal is not only to accomplish those artistic goals, but to feed your family.”

At Gotham, Roohi teaches both Fiction and Memoir.  “In a memoir class, you form this relationship in the classroom that’s really intense,” Roohi says. “You get to know people in a way that you would never get to outside of that classroom.” Fiction, Roohi finds, is a little more straightforward. “But sometimes it’s harder to get people to open up and be authentic about the human experience,” she says. “Both genres have their challenges.”

Roohi is strict about keeping a distinct line between memoir and fiction. That means there’s no fictional spin in her memoir class. “As a researcher, I value facts and having integrity about what you’re trying to present,” she says. “It’s really important not to misrepresent your findings. But I also think it’s not that simple.”

Roohi is currently working a novel that is part historical, part contemporary. The historical setting places us in the nineteenth century where a woman is brought from India to South Africa as an indentured servant. The contemporary narrative centers on another woman who has left Pakistan for political reasons and ends up investigating the historical woman. She’s also helping fellow Gotham teacher Shahnaz Habib launch a literary fashion magazine called Laundry.

With Roohi, there’s always another side, another color to explore.