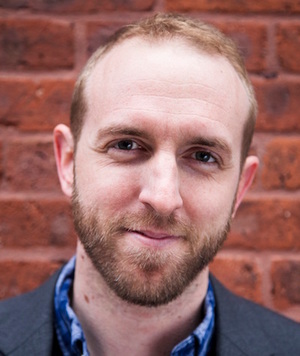 Gotham teacher Ryan Britt is not your typical science fiction fanatic. While he blogs for the science-fiction publishing house TOR, Ryan also writes more “literary” things, including personal essays, fiction, and plays. “I don’t discriminate between stories,” Ryan says. “From Michael Crichton to Edith Wharton, there’s not much of a difference. As Raymond Carver once said, ‘Every writer is just reporting how the universe is for them.’”

For Ryan, the universe is certainly vast and varied. He boldly claims, “I’m the only sci-fi commentator that also writes personal memoir.” On TOR.com, Ryan writes about everything from superheroes to sea monsters to Ray Bradbury to all iterations of Star Trek. Recently, he penned an article entitled, “Spider-Man is the Hero Geeks Can Aspire Towards,” detailing why Peter Parker as a dyed-in-the-wool geek appeals to so many readers. He’s also contemplated possible sequels to the film, Prometheus and a lack of plot twists in the recent remake of Total Recall. In addition, Ryan oversees TOR’s “Genre in the Mainstream,” a regular blog series devoted to spotlighting authors and novels who use genre elements in stories that are generally considered mainstream or literary fiction.

When Ryan was growing up, he consumed what he refers to as a pop diet of literature: Agatha Christie, Kurt Vonnegut, Star Wars novels. When he began writing himself, Ryan’s cornucopia of literary interests gave way to an adventurous style. “Literary fiction and memoir can learn a lot from genre writing because it moves,” Ryan says. “Fantasy, science fiction, and mystery all have tension—you need that in your stories.”

In order to break into the more “literary scene” in New York, Ryan began performing with The Moth Storytelling group—a live reading series in the city “dedicated to the art and craft of storytelling.” The Moth’s directors work with each storyteller to find, shape, and present their story. Since Ryan had a background in public speaking and coaching debate teams, he found himself at home on The Moth’s stage. Ryan then decided to start writing plays—often comedies with fantastical elements. He submitted his work to “slam theaters” where actors would cold-read plays and the winning play would be produced. Ryan says it was great to work in an environment where there were no boundaries and he wasn’t worried about the ultimate destination of the work.

When Ryan turns to his personal life for inspiration, he’s usually drawn to his relationships. “I tell everyone who knows me, they’re in danger of being written about,” he says, half-joking. In crafting his work, Ryan takes special care to create characters that aren’t simply one-dimensional. “When you write about sex and relationships, no one’s going to read about you ‘winning’ – that’s just bragging,” Ryan says. For example, in his personal essay, “Art Star” Ryan detailed his relationship with a visual artist who featured him as a major subject of her work—a prospect that was sometimes awkward and difficult, particularly after they parted ways.

For a time, Ryan kept an online flash fiction blog called Side Affects. He vowed to write at least one story per day for a year. He treated it like a writing work-out, and was simply happy he was producing such a large amount of material.  “If you think you’re not writing enough,” Ryan says, “then you probably aren’t.”

Someday Ryan hopes to write a “sci-fi memoir” in which the main character would wake up in his own body ten years prior with all the information he had in the future. In Ryan’s words, it would be an extreme version of what all memoirs are: the choosing of what to reveal and what not to reveal.

“If I have to take the unicorn out, then it’s memoir,” Ryan says. “The act of being a writer and being part of a writing communityis my religion—not just science fiction or speculative fiction. I don’t worship at any one church.”