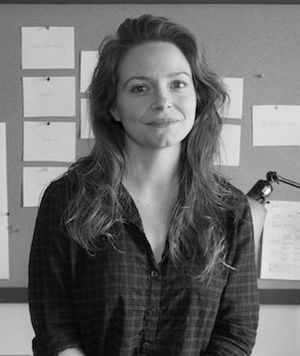 “I don’t really remember a beginning to writing,” says Gotham Nonfiction and Article Writing teacher Sarah McColl. When she was young—aside from participating in the normal kid stuff like running around with her siblings, riding bikes, building forts, and watching fine television (programs like Hey Dude and Murder She Wrote)—Sarah also loved school. Sarah is the kind of person who can say simply “I’ve always really loved school,” and make it sound, well, cool.

Writing, a big part of what she loved about school, transformed into an outlet for young Sarah. Aside from her diary, which she’s kept since first grade, she also penned her own stories. “Looking back,” she says, “I think I was trying to make sense of the changes in my life that I couldn’t control.” These changes included her mother’s divorce, a big move from Texas to Massachusetts, and a large family that grew upon her mother’s remarriage. There were already four kids in the family when a stepbrother was added into the mix. “All those siblings felt like being in a gang or at a constant party,” she says and adds, “But I was always very concerned about getting my fair share at dinner.”

Speaking of food, Sarah’s professional writing career started with a food blog. She started the blog in order to learn more about cooking and this led her to a series of jobs and a desire to pursue writing as a career. “Writing,” she says, “can be really challenging work, but it’s also the most satisfying work I’ve ever known.

Today, Sarah’s concerns are still food oriented. As a food writer and editor she is wrapped up in the who’s, why’s, where’s, and how’s of our food system. “We so take food for granted and expect it to be dirt-cheap, but those grocery store prices don’t accurately reflect the time, labor, or resources that went into growing, harvesting, and bringing that food to market,” says Sarah.

Her name appears on the bylines of publications such as Bon Appetite, Yahoo Food, Food 52, Epicurus, and TakePart. Her articles have titles like “This Food Truck Wants to Serve Up Dinner and Social Justice” and “Are Your Summer Berries Being Picked by Abused Farmworkers?” She is clearly interested in the people behind the food. The ones “working really thoughtfully seven days a week to remake our food system in a more sustainable way. Especially small farmers and especially women in sustainable agriculture.”

Just as she did when she was a kid, Sarah is still using writing to make meaning out of the world. “Only now, instead of writing the future in thinly-veiled fiction, I am trying to order and understand the past and present through my nonfiction work.”

She is currently on a writing retreat at the Vermont Studio Center working on some new nonfiction pieces and a mother/daughter memoir. She describes the retreat as her “idea of heaven on Earth: a vibrant community of artists, time and space to work, wholesome hippie food, miles of country roads to ramble.”

When she returns to her home of Brooklyn, she is likely to be spotted enjoying a margarita happy hour or roaming the fresh picks at the local greenmarkets. Both of which she will likely churn into a story or two.