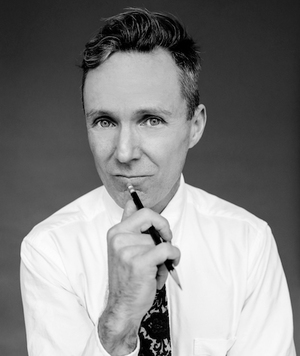 Born in St. Louis, the baby in a large Irish Catholic family, Scott says he was “always the slightly odd, creative youngest.” He spent his time writing, acting, putting on shows and making films. At ten he wrote his first novel, in the horror genre, his fascination at the time.

He went to Catholic grade school and had to hide his Jaqueline Susann and Harold Robbins novels in the bottom of his school bag. Their books primed him for a life outside of Missouri and he set his sights on moving to New York City as soon as he could.

Scott’s mother was extremely encouraging of his young dreams and was the one who typed up that first novel and she also bought him a video recorder, which he promptly used to remake The Exorcist with one of his sisters, Amy, as sidekick and camera person.

The first time he received writing advice was from his 7th grade teacher, (“Mrs. Fitzsimmons, an Irish teacher with fiery red hair”) who wrote him a note at the end of the year that he still has memorized. “Write all summer. Write everything. You are a writer.” She also tried to convince Scott to read literature. “But I told her Valley of the Dolls was literature.”

In college, Scott fell in love with classic literary fiction. He was especially drawn to Faulkner and Cormac McCarthy. “Give me a page-long sentence and I’m in heaven,” he says. After graduating, Scott stuck to his plan and moved to New York where he worked as a journalist. He wrote fashion for Fairchild publications and did freelance writing.

New York turned out to be everything Scott had hoped for. “Manhattan has always felt like my town. My perfect fit. We have so much energy, so many characters on every street corner.” All of those characters drove him back to school. He returned to the New School to work on his MFA, which is where he blossomed as a writer, specifically as a novelist. “It really allowed me to slowly embrace and then live the writer’s life. Now, I need to be writing, working on a novel or story, or reading something to inspire me all the time.”

And write all the time, he does. Scott is currently finishing up his7th novel, The Root of Everything. “When I am working on a book, the world of the novel never leaves me. So I am in essence always working on it. Jotting ideas, thinking of next scenes.” Along with gathering inspiration from New York City, he also gathers inspiration from the city of his childhood, St. Louis, as well as his childhood itself.

Aside from Mrs. Fitzsimmons, Scott had a number of wonderful teachers along his writing journey. And with them in mind, he decided to give teaching a go. He has been teaching at Gotham for a year now and finds it rewarding to help unlock students’ work. “So many people get stuck, thinking writing is a deep mystery and they just need a touch of help and encouragement to trust their voices and let it rip.”

The main advice he gives to his students is this:

It’s the only way to keep the itch at bay.