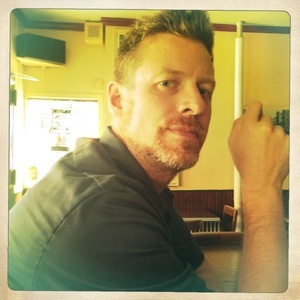 Before Gotham teacher Scott Cheshire discovered his passion for fiction, he spent many hours at the pulpit delivering sermons. Raised as a Jehovah’s Witness, Scott’s first career was being a child preacher.

Then, the questioning began.

In the back of every New World Bible (the official Witness translation), there are appendices that include maps and “scholarly references” supporting a literalist reading of the Bible. Ironically, it was the inclusion of these references, designed to keep believers in place, that led Scott “astray.” Scott realized how terribly flawed the so-called scholarly references were in that they merely propped up the Jehovah’s Witness agenda. He researched secular criticism along with histories of American Christianity, Mormonism, and Seventh Day Adventists.

After years of focusing on the impending apocalypse, or “End Times,” Scott decided to look toward the future and enroll in college, something almost unheard of in his community. He took Biblical literature courses and found that even sacred texts steal. “Good writers steal or are at least influenced,” Scott says. “The writers of Genesis stole or borrowed from other religious texts.” Eventually, Scott found himself attending church less and less and even skipping the much-revered “Last Supper” celebration.

Ultimately, Scott began exploring “the wrong books” (aka, works of fiction). And then he began writing fiction, publishing short stories and getting an MFA in Fiction from Hunter College.

Still, Scott never entirely let go of his religious past. “I’ve been imprinted,” Scott says, “so I’ll never be rid of it. Almost everything I’ve written about has had to do with this culture.” Scott’s soon-to-be released novel High as the Horses’ Bridles is a reference to the Book of Revelations’ description of how high the blood will rise during Armageddon. The story follows Josiah, a young boy who experiences a “vision” that the world will end in the year 2000. We follow Josiah’s life from his childhood in 1980s Queens to more present-day 2007; the world has not ended, but his life has fallen apart.

Interestingly, Scott’s religious background has prepared him for his next role at Gotham: helping to develop the new course, The Writer's Mind. The goal of the course is to access the subconscious, delve into the senses, and find inspiration in other art forms, such as film, music, and art.  “We want to get to a ‘liminal’ state,” Scott says, “the place between the conscious and subconscious. Writing is not just when you’re sitting down at the desk. It’s all the time. It’s about connectivity.”

In a way, his ability to find the deeper levels of his own subconscious is something Scott has been training for his whole life. Instead of trying to access a religious depth, he now searches for a literary one. Scott confesses, “I’m a believer and an atheist.”