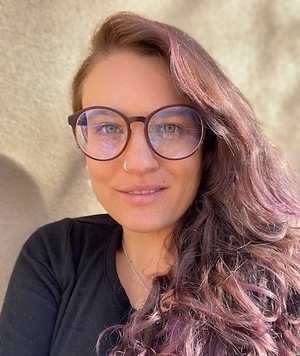 Serrana is no stranger to magic. Her work, spanning from short story to musical, uses the surreal and mystical as a platform for narratives that reflect the startlingly real, universal human experience. She is part of a history and community of writers that ask how we can use the extraordinary to paint pictures of relatable and often deeply emotional life experiences, accessible to the listener/reader as both a lyrical art form and an attainable rendering of personhood.

Serrana’s co-written operetta Fatty Fatty No Friends, adapted from her illustrated book of the same name, won a Best of Fest prize at the New York Musical Theatre festival in 2018— it follows Tommy, a young boy who shows us a day in his world as an overweight kid through his own gothic, eerie lens: a macabre children’s story written for an adult audience.

“I essentially just wrote a fiction story,” Serrana told me when I asked her about her genre-bending portfolio, “And fed it to my partners who formed it into a musical.”

In addition, her short fiction has since then been published in literary magazines like X-R-A-Y Literary Magazine and Prometheus Dreaming. She has successfully moved through these various creative forms while maintaining her prevailing surrealist style, heavily influenced, she says, by her surroundings growing up in New Mexico.

“I write about the desert a lot,” says Serrana. “Not necessarily the setting, but the aesthetics. Where I grew up molded the things I notice in any other place. The sunsets. How rain moves.”

Serrana’s rain and sun changed when she moved to New York to pursue undergraduate acting at Ithaca College, an experience which she described as “uncomfortable” but ultimately a great reservoir to draw from in her writing, and then graduate creative writing at Sarah Lawrence, where she now teaches a workshop in surrealism and magical realism.

She says where she is located and what she can observe always impacts her work, especially because she’s always viewing the world through the specific kaleidoscope of her own two eyes. The corner of the world she was raised in and her life experiences mold the way she looks at life and what she subsequently draws from it in her writing— this is something which she also understands is true for her students. There is, to some extent, a magic in the individualism with which each writer perceives the world around them.

“What if,” Serrana then asks, “we let the fact that the way we experience life is a little bit unreal or magical inform the way that I write?”

Serrana proposes this question through her work and her teaching— what if the human experience is, to some degree, magical? What if writing in extremes, exaggerating to develop feeling, is not just a style but a necessary facet of storytelling? Is magical realism a branch off of realism, or in fact just its sister? For Serrana, the surreal is not a container for story but a language for it: a tongue in which we can speak in order to express a correlative feeling beyond classic description. Serrana Laure Gay wants all of her sentences to do more than one thing.

“I’m big on the energy of words when you put them together,” she says. “Playing with literal meaning and connotation, with the correlative, and asking what exists in the unsaid of what you’re saying.”