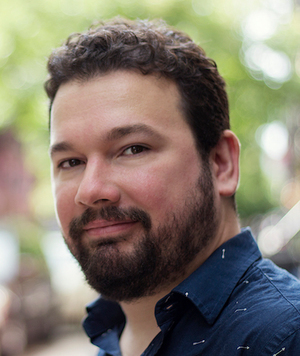 Seth Fried has always admired “funniness”. As a kid in Toledo, Ohio he loved to write zany humor essays and fondly recalls cutting his teeth writing “horrible, unfunny” pieces for the high school newspaper and fiction for his friend’s literary journal. He realized that writing speculative science and fake histories wasn’t just fun—it was a satisfying way for him to express himself.

So after high school, Seth veered off onto an unconventional, but more fulfilling route. “I briefly went to college,” Seth explains, “and then…stopped. No thanks. I started working in coffee shops and putting out literary journals of my own.”

One day, Seth sent one of those journals to a high school English teacher who had been supportive of his writing. She knew that Seth had talent, and nudged him to enroll in Bowling Green State University, a little north of Toledo, to boost his skill. And boost Seth did. He served as assistant editor for the Mid-American Review, workshopped a hodgepodge of stories in his writing classes, and tricked the MFA students into buying him beer so he could pick their brains. Funnily enough, Seth majored not in writing, but in Latin. (“I've always had a soft spot for the word pulcher,” says Seth, when asked about his favorite Latin word. “[It] means ‘beautiful’ despite the fact that it's one of the ugliest words imaginable.”)

All that editing, workshopping, and brain-picking motivated Seth to write a quirky short story collection. He was still in college when he completed The Great Frustration, and shopped it to agents by the time he graduated—the book was published soon after that.

Eager to start a new batch of stories, Seth then moved to Bay Ridge, Brooklyn. But he didn’t want to write The Great Frustration 2.0. “I said to myself, if this is important to me, I have to figure out how to do this as a workman rather than have it be a sporadic flaring-up of my personality.” So Seth carved out time to learn the traditional elements of fiction and humor writing. In the meantime, he published a fake writing advice column with Tin House, wrote freelance medical and technical pieces, and switched from the short story form to the novel.

Incorporating more traditional elements into Seth’s work hasn’t stifled him. In fact, Seth finds that structure yields him weirder, more fun results than he used to get in his high school days. And now? Seth’s finalizing the manuscript of his new novel Metropolis, which was recently acquired by Penguin. Even though Seth used to be wary of the publication world, he says that every aspect of working with his editors is a joy. “I wanted the cookie,” Seth says of his publishing goals in his youth, “and now I want to spend more time baking than I do eating the cookie.”