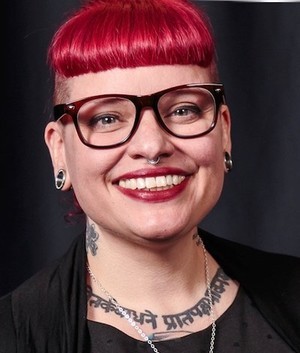 Gotham teacher Stacy Pershall grew up in a church that preached mental illness was a symptom of “not loving God enough.” When Stacy was finally diagnosed with Borderline Personality Disorder (BPD), this sentiment haunted her. It seemed her church—and family—blamed her for something she could not control.

In her memoir Loud in the House of Myself, Stacy details her Southern Baptist upbringing in her tiny hometown in Arkansas throughout a narrative that spans ages eight to thirty-five. She says, “You can’t understand me without understanding my hometown.” When she was diagnosed with BPD, Stacy learned that one cause, aside from genetic predisposition, is an “invalidating environment.” Everywhere Stacy turned, she was told she was sinful. This invalidation was so pervasive, she could never escape it—until she left.

Now Stacy works with the organization Active Minds, a mental health advocacy group for college-age students. Suicide prevention is their number one priority. After Stacy’s book was published, they invited her to speak at George Washington University. After her appearance, Active Minds board members invited Stacy to apply for a position on their Speakers Bureau. She leapt at the chance.

Soon, Stacy was speaking to parents with children who have mental health issues and psychiatric nurses from the National Institutes of Health. During each speaking engagement, Stacy treads carefully. Specifically, she is not permitted to discuss medication, including her own, or offer any medical advice. When speaking to a group of nurses at Catholic University in Washington, D.C., one of the nurses asked Stacy if she was religious now (since receiving treatment for her disorder). Stacy, who is nothing if not forthcoming, replied, “I’m an atheist.” People have attempted to, as she puts it, “argue God with me” but for the most part, the conversations are peaceful and diplomatic. Stacy says, “If I believed there was such a thing as God’s work, this would be it.”

Happily, Stacy’s relationship with her parents has changed dramatically over the course of the last several years. Once she started receiving treatment and her symptoms vastly improved, Stacy’s parents had to confront her mental illness—and that meant relinquishing the notion that mental illness was a sin. Both Stacy’s mother and father have become mental health advocates. Stacy’s father, a church elder, has encouraged people suffering from mental health conditions to seek medical attention.

When she’s not teaching or speaking on behalf of Active Minds, Stacy writes for the blog at Psychology Today. Her pieces focus on BPD and suicide, and include both personal stories and interviews. Also, Stacy is now working on a young adult novel set in the 1980s, near the end of the Cold War—or as she calls it “a light-hearted Southern Gothic kids’ book about Chernobyl.” Fascinated by both the technology and political climate of the era, Stacy wanted to write a story for kids born after the Cold War ended.

Indeed, one could say Stacy’s greatest gift is her ability to reach people through both her writing and activism. She says, “You get to be the adult you needed when you were a kid.”