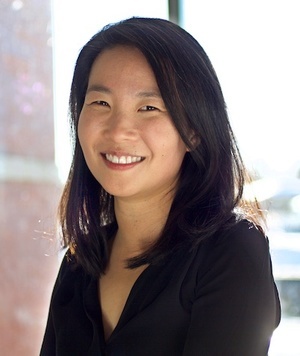 “I didn’t pick up a pencil or anything until I had kids,” says Gotham teacher Teresa Wong. “No child is going to let you sit there and write for even twenty minutes. But drawing, kids can sit alongside you or they can watch you and be interested.” Teresa’s first book Dear Scarlet is a graphic memoir that traces her time as a new mother struggling with postpartum depression. The New York Times called the book “brave” and Publishers Weekly said it was a “raw but reassuring memoir filled with helpful suggestions to mothers struggling with similar situations and feelings…”

“A lot of the memories came back to me as images,” recalls Teresa. “And being at home with a little baby by yourself is really silent, so I thought [the story] would be better conveyed through images.” She drafted the memoir in a sketchbook, but for the manuscript, she thought surely she’d need to collaborate with a professional illustrator. Teresa asked an artist friend of hers if he would help. “He said, ‘The story is so personal, and it's so vulnerable. It definitely has to come from your own hand.’” So the sketchbook became the manuscript for Dear Scarlet.

“I don’t know where the ideas come from—somehow they land,” says Teresa. “You need to have a space for them to land.” Part of that means making room for recreation, for brainstorming and doodling. Before she was drawing, Teresa was writing. “I tried for years to write a book about my parents, about how they came to Canada. It just wasn’t really working out.” When illustration entered the mix, Teresa’s creative process inevitably changed. “When you type on a laptop, everything you look at is standardized and formalized. You could be typing a legal document or an email or a creative project—and it all looks the same.” “Moving away from that has really helped both my drawing and writing,” says Teresa whose work is now primarily paper-based. “It feels more playful in a way.”

“I think that graphics lends itself especially well to memoir because you really get to stand in the person’s place and see what they see,” she says. “There’s almost an instant transmission of feeling or meaning or mood, because what the graphic memoirist is doing is showing how they would frame it.” Of course, with memoir it’s important to relay the truth as best the author can, but when Teresa was in the second grade, she realized just how influential words could be.

Asked to keep a daily journal in class to write about what happened that week or that day, Teresa says, “I remember thinking my life was not that interesting. So, I would embellish… I took piano lessons and I added that I was in ballet, which I was not. I don’t know why I said that. No one ever questioned it. It was totally believable. I think that’s when I began to feel like I had power in my words.”