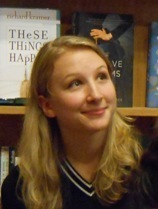 When she was four years old, Gotham teacher Thaïs Miller told her parents she wanted to be a “storyteller.” Her parents clarified, “Do you mean you want to be a ‘writer’?” This distinction might be necessary for some, but not Thaïs. She would eventually become a novelist, playwright, screenwriter, and poet. There’s hardly a type of writing she hasn’t attempted.

You may be wondering about her unusual name. Thaïs is derived from both Greek and French, and she shares it with Alexander the Great’s courtesan/mistress. (He supposedly destroyed a palace for her.) Thaïs’s mother, however, discovered it while reading the book Mystery Schooner. She decided to name Thaïs after the main character who was known for her tough, scrappy ways.

Indeed, one can definitely detect a note of “scrappiness” in the real, live Thaïs. Impressively, she wrote the first draft of her novel, Our Machinery in just thirty days, during NaNoWriMo (aka, National Novel Writing Month). The dystopian novel explores both capital punishment and suicide via a “death machine.” Thaïs also penned a collection of short stories entitled The Subconscious Mutiny and Other Stories—equally dark and foreboding tales. (You can read more about Thaïs's experience with NaNoWriMo here.)

While she was pursuing her undergraduate degree at American University in DC, Thaïs stumbled upon Brown Paper Publishing, a small, independent press, in one of the free city papers. Determined to see her novel published, Thaïs thought Our Machinery might be the perfect fit. Turns out her hunch was right—her manuscript was accepted a week later. She was 19.

Despite publishing a novel before graduating,Thaïs still cautions against “submitting too early.” In fact, she had even made the conscious decision not to submit for publication until she was over eighteen. That may not sound like restraint, but for a girl who kept notebooks upon notebooks of stories her whole life, it was.

After college, Thais decided to pursue an individualized MA degree she designed through the Gallatin School of Individualized Study at NYU. When asked what made her decide to go the untraditional, non-MFA route, she says, “Studying literature as an undergraduate in Washington, DC made everything I read political … I wanted to be in conversation with people who cared about politics, history, and literature and their impact.” And, she didn’t want to stop developing intellectually (outside of literature) nor was she about to be placed in a specific concentration—Thaïs took classes in fiction, poetry, and dramatic writing. Her first thesis draft was what she calls a “weird combination of a screenplay and poems.”

Thaïs has tried (and enjoyed) her hand at several types of writing, but fiction remains her favorite genre because in her words, “there’s no moral quandary.” She points out that journalism and memoir sometimes require writers to exercise caution, but fiction allows us to “go outside the boundaries.”

Not surprisingly for someone whose interests are vast and varied, Thaïs was also a serious violinist. She played from the tender age of four until she was twenty-one. For a long time, both artistic passions fed one another—Thaïs wrote short stories about musicians and in turn her own music gave her a release from writing when she needed it.

This fall, Thaïs will spend a month living in a castle (!) at a writing residency outside of Edinburgh, Scotland where she will edit some short fiction and complete work on her fourth novel (yes, you read that correctly). The new novel is based on letters between her great-grandparents and various family members both before and after World War II.

From every corner of the page, Thaïs has found a number of outlets to express herself. True to Thaïs’s optimistic and determined form, she says, “If you enjoyed writing it, there’s someone out there who will enjoy reading it.”