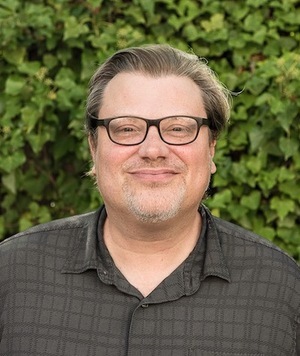 Growing up, Gotham Screenwriting teacher Tommy Jenkins lived across from a movie theater. “I literally grew up with the movies," Tommy says, "My key entertainment was right across the street." From the age of five when he saw Star Wars for the first time, Tommy was enthralled with the magical land of moviemaking— even to the point of wanting to join Luke, Leia, and Han on their adventures.

Film wasn’t the only art form capturing Tommy’s attention. He spent part of his childhood in Berea, Kentucky where furniture makers, glass blowers, quilters, and painters all made their home alongside his beloved silver screen. Visiting the local college for various art shows was a family tradition. In time, he would learn that just as artisans hone their craft, so do screenwriters.

Tommy explains that film is two compositions—a narrative and a visual art. While he’s not an artist himself, Tommy appreciates those who are. “Being a film person, I’ve always responded to things visually.”

Before he took writing classes, Tommy wasn’t sure what to make of the work that went into the written word. He thought it was something you just did. “But it’s not that way, obviously,” Tommy admits. “It’s a craft—if you learn it, you’ll be able to use it. You will be a better writer for it.”

After growing up in the South, he moved to New York to pursue his MFA in Screenwriting at Columbia—and ended up staying in the city for ten years. During that time, he taught "live" screenwriting classes for Gotham. Today he makes his home in Raleigh, North Carolina and teaches online. While there was a period of adjustment, Tommy enjoys teaching online and says the format offers such a wide variety of people and perspectives. Plus, students are able to form a virtual writing community—regardless of location—via the Internet.

Tommy says he likes living in a place where “the business” (ie, film industry) isn’t the first thing on everyone’s minds. As a bonus, there are a lot of writers in the area, especially given the academic communities of the University of North Carolina and Duke. (Tommy himself teaches at Lewis-Burke, a small two-year school.) As Tommy has proved, you can live just about anywhere and still make a writing career happen. And he suspects enterprises such as Netflix and Hulu will soon offer their own original programming, making it even easier for aspiring filmmakers to get in the game.

Currently, Tommy is brainstorming ideas for a science fiction screenplay. (Funny enough, despite his adoration for the Star Wars films, this is his first foray into the genre.) Tommy previously concentrated most efforts on comedy, inspired by his Southern background and all the colorful characters in it. “We’re great talkers,” Tommy says, referring to his Southern literary predecessors such as Faulkner and Flannery O’Connor. He’s also co-authoring a series of books that are “fanciful takes” on classic mystery tales.

It seems close proximity to a movie theater can be quite influential on a young mind—and an adult imagination.