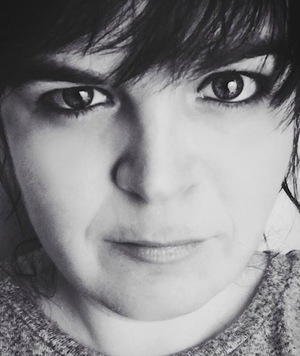 “Listening to people is my favorite thing to do,” says Gotham Screenwriting and TV Writing teacher Vanessa King.

Perhaps this quirk comes from her childhood, where she says, “80’s and 90’s television was sort of my babysitter.” As a kid, both of her parents worked late. “I’d get home from school, turn on the TV and do my homework in front of it until I went to bed,” she says. Although she did not know it at the time, all of these hours half-listening to speech patterns on TV would build a foundation for her future calling, scriptwriting.

Growing up in Canada, the American film/television industry wasn’t something Vanessa sought out directly. “I got into TV writing by fluke,” she says. “I was going to be a doctor, literally.” That is until she worked on two student films in college. “It just sort of bit me,” she says and so she called her parents with the good news. They were supportive but firm: she had to figure out a way to support herself.

After college and still in Canada, Vanessa started working as an assistant for an actor who ended up arranging visas for her to move to LA to continue working for him. When that actor had to move to yet another country for work, Vanessa saw her chance to make the leap to the place she saw as her future: New York City. “I packed up my two cats and a suitcase and slept on my friend’s floor and I’ve been here ever since.”

In New York, to make ends meet, Vanessa continued working assistant jobs, and in her early days bartended. When she wasn’t working she would go to a local coffee shop and work on her scripts. “I’d sit there and pretend that I was this prolific writer,” she says. Realizing that she had a lot to learn but not a lot of money for classes or to even buy books she decided to become her own teacher. She would sit at one of the large wooden tables at Barnes and Noble for hours, copying—word-for-word—entire books on scriptwriting into her notebook.

Now with the rules down, and a screenplay in hand, she started attending screenwriting meet-ups. “It was just a bunch of dorky writers who would meet and workshop a script for two hours in the basement of a bar,” she says. As the popularity of the (now defunct) group grew she found herself falling into a moderator position. When the guy who started the meet-up approached her to design a curriculum for a TV Writing version, she found herself writing her first TV pilots.

She ended up entering a few of her TV scripts into a bunch of contests. “I was fortunate that one of the ones I entered won every contest I put it into,” she says. “I was flown to LA and met agents and managers and after that I was like ‘oh, I guess I should really do this.’”

And she did. 2018 is going to be an exciting year for Vanessa. She has two short films coming out later this year and is currently in Atlanta shooting her TV pilot “Two Roads”, which she co-wrote and is co-directing and producing. Vanessa says her whole main thing when writing is “inclusivity, representation, and strong female protagonists.” Sony must have really liked her point of view because they bought it on a pitch for their Playstation Emerging Filmmakers Program.

Aside from all of this and teaching for Gotham, Vanessa is also the co-founder and moderator of the Screenwriters Co-op and on the boards for Broadway Cares/Equity Fights AIDS and The Poets Act. And she is always, always working, writing, and starting new projects.

When Vanessa first starts something new, she always falls back to her ears for inspiration. She doesn’t just listen to people anywhere. “I’ll get on a 5:30 or 6:00 am bus to the train station in Philly,” she says. “I’ll just sit there and sort of watch people to get myself out of where I am and what I’m used to.”

On days when the three-hour bus to Philadelphia seems too long, she’ll settle for a simple three train commute from her apartment in East Harlem to a cafe in Queens just to listen to people talk. “I know, it’s terrible because it’s eavesdropping,” she says, “but it’s all for the work, I promise.”