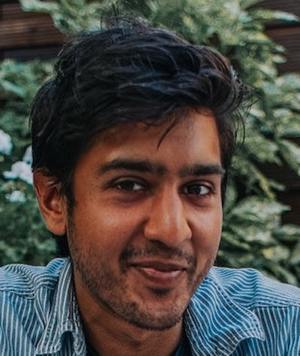 At eighteen, Gotham Fiction teacher Varud Gupta knew exactly what he wanted to do with his life—and it wasn't a career in writing. “At NYU, we had to take a required creative writing class, and it was one of the classes I performed the worst in during my time there,” Varud confesses, a statement that anyone who has taken one of his Gotham classes would likely find shocking.

In fact, Varud enrolled in NYU’s Stern School of Business in an effort to fulfill a different dream, fueled by curiosity and too many viewings of House of Lies– entertainment and media consulting. He spent his time in college reaching out to campus consulting clubs and networking with upperclassmen, until he finally secured a job in his junior year at Deloitte Touche Tohmatsu Limited. But after six months in Los Angeles, the prospect of spending a whole life in this field was no longer appetizing.

It was then that writing began to play an instrumental part in his life. “During my time at Deloitte, as one of the coping mechanisms for the existentialism I was experiencing,” Varud says, “I started journaling, just writing thoughts.”

After the realization that consulting was not for him, Varud bought a one-way ticket to Argentina. From there, he made his way across Latin America, exchanging labor for the opportunity to explore a whole new continent: tending to a hostel in Argentina, working on a dairy farm in Chile, and bartending in Peru.

He described his writing at the time as “a digestion,” of the feelings he was experiencing, and the cuisine that was the subject of his writing throughout his travels.

Though food was his ticket into the writing world, it wasn’t Varud’s only journey. “It wasn't necessarily about the food itself,” Varud says, “but the experiences, the cultures, and the stories that surround meals that personally interested me.” After eating his way through Latin America and Europe, Varud finally landed in India.

As an Indian American, Varud had visited for brief vacations in his childhood, but was never able to fully immerse himself in the culture. In adulthood, he was able to make up for lost time. His first book, Bhagwaan ke Pakwaan (or in English, Food of the Gods) was a cookbook that explored the stories told among different Indian communities. While Varud does not consider himself a religious person, he traveled to many different communities to research their faith and cuisine.

His next project was also an homage to his Indian culture. The graphic novel Chhotu: A Tale of Partition and Love was a joint project, with Varud’s words and his cousin’s illustrations. The word chhotu can be translated as “small one,” an affectionate nickname, and a powerful statement that even the least assuming among us can make a change in the world. The protagonist is based on his grandfather, who lived in India at the time of the British partition, a time of deep colonial unrest.

Varud’s writing touches on subjects heavy and light. When he is not exploring the state of politics and religion in India, he is writing about food. At the height of the pandemic, after protests that his cooking was “too fancy” for the average kitchen, he began a series on Instagram. After his travels in Europe and Asia, he had amassed a large collection of Instant Ramen Noodles, many nearing their expiration dates. He reviewed his collection, breaking out one packet every day for 30 days. “Definitely, I was concerned about my sodium intake,” he admits. "But I mean, I survived. It was a lot of fun.”