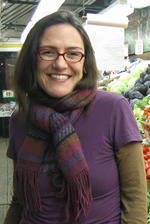 
When Gotham How to Blog and Food Writing teacher Zora O’Neill first started blogging, she still had a dial-up connection to the Internet. But since that humble beginning, she has not only become a successful blogger, but a food writer, cookbook author, and travel guidebook master. A true Jill-of-all-trades, Zora has always enjoyed exploring numerous creative avenues.

Early in her career, Zora went from working as an editor at a technology magazine to enrolling in cooking school and writing freelance for travel guidebooks. She then spent time in the restaurant business, working at the East Village eatery, Prune, where she met Tamara Reynolds. Their friendship forged the Sunday Night Dinner in Astoria—informal dinner parties for friends—which led to the two women co-authoring the cookbook, Forking Fantastic!: Put the Party Back in Dinner Party.

It became clear that Zora’s love for food and travel made a perfect match. After much perseverance, Zora landed a gig working on a Yucatan guidebook. She soon had assignments to write about Cancun, Cozumel, and various parts of New Mexico. Eventually Zora’s blog, Roving Gastronome was born. “I started the blog," Zora says, "in part because of a pig and lamb roast we did for one New Year’s Eve.” Her first post is one long narrative about the party and the specifics of the cooking. In fact, instructions for roasting a whole lamb are included in Forking Fantastic. But now, as its name implies, the blog is mostly about Zora’s culinary adventures traveling the world.

The practice of blogging has evolved dramatically since Zora first began Roving Gastronome. She notes, "The stakes are a lot higher now, people are no longer voyeuristically following someone’s blog." Zora believes that Facebook and Twitter are now the best venues for brief updates and comments, which has made the traditional blog more of a venue for substance.

Roving Gastronome is a work of art, in both a literary and visual sense. Some of Zora’s design themes have been influenced by her travels, particularly the turquoises and browns of New Mexico. Zora also has a well-developed ‘techie side.’ But when she first learned Cascading Style Sheets (aka, CSS)—the language that controls the parameters of a website—Zora says she retained only about ten percent of the information. She compares it with “feeling fluent in Spanish in Mexico one night, sipping margaritas and then it all goes away the next day.” Zora adds, “In a perverse way, the tinkering and juggling has kept me blogging.”

When it comes to her students, Zora acknowledges that it’s gratifying to help with the technical aspect of blogs, but developing good content is the first priority. “The blogs that have stuck around are more focused,” Zora says. “They’ve gone through an evolution.” She cautions that while “random musings” can be a good place to start blogging, “the world isn’t exactly going to bang down your door to read them.” Fortunately, her students continue to come up with great idea after great idea, reminding Zora that the blogosphere is still an important space for writers today.

Currently, Zora is in New Mexico updating guidebooks to Albuquerque and other parts of the state. She’s also at work on a longer travel book on the Middle East. Zora even maintains update blogs for her Yucatan and New Mexico guidebooks. She says, “If I can spare one person from driving down a dirt road to find a closed restaurant, then the guidebook updates are worth it.” Joking, Zora adds, “I don’t want them cursing my name.”