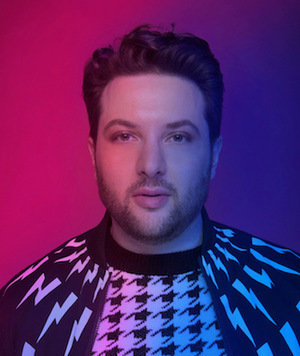 Gotham teacher Lev AC Rosen will not tell you what the “AC” in his name stands for, but he will share his passion for science fiction, steampunk, video games, and film noir, among other things you. Oddly enough, of all Lev’s passions what he talks least about is writing.

“Answering questions in class makes it easier to talk about being a writer, which I’ve never been very good at,” Lev says. “When I’m talking to a bunch of inspiring writers, though, it doesn’t bother me because it doesn’t feel like ego-stroking. It’s more genuine than posturing.”

Lev got interested in the science fiction and steampunk genres by way of video games—Final Fantasy VI specifically. “My first book [All Men of Genius, as steampunk] started out as a lark, when I was in grad school,” Lev says. “I came up with the idea of mashing up Twelfth Night and Oscar Wilde, twisting some plots, and then it wrote itself very quickly.” He calls it a romantic comedy as well, which doesn’t always appeal to the typical sci-fi crowd. “It’s doing very well in Brazil,” he says. “It’s funny, I don’t have an English Wikipedia page, but I do have one in Portuguese.”

When he started working on his more recent novel Depth, Lev turned to his love of New York architecture, particularly of the Victorian and Art Deco eras. “I grew up on Washington and Canal, before Tribeca was cool,” he says. “There was a pasta sauce factory across the street from me.”

Depth takes place in the future after the ice caps have melted and most of the New York City metro area has been destroyed.  “I went forwards to go backwards [in time]. I created the sort of gritty, noir New York I wanted,” Lev says. “There’s actually a weird trend happening in sci-fi right now. It’s called ‘cli-fi,’ or climate science fiction. But sci-fi has actually been dealing with environmental issues for years.”

Lev had minored in film at Oberlin College, so he’s been interested in film noir and the femme fatale for a long time. As he explains, “The protagonist is a female detective who is close friends with the deputy mayor.” (Film noir often uses private eyes or plainclothes policemen as central figures.)

Woundabout, another novel in the works, is a collaborative effort between Lev and his younger brother, Ellis. The seeds of the story were planted at a family gathering when Ellis asked Lev about the publishing business and how one could become an illustrator. (Ellis actually has a master’s degree in sequential art, which is essentially graphic novels. Growing up, Ellis was always drawing and Lev was always writing.) “I told him we could do a book together and we could pitch it as brothers—a good selling point,” Lev says. “Then before I knew it, the rest of the family started getting involved, talking about how kids are always running always from something, so we decided to write about orphans running from something.”

He calls the story an “American tall tale.” Connor and Cordelia are sent to live with their aunt after the tragic death of their parents in the strange town of Woundabout, where nothing ever changes and everyone is expected to know things without asking and follow a strange routine. Lev is encouraging kids to read the story aloud because “it has a very narrative tone, the narrator feels like a character even though he’s never named.”

Lev is currently working on edits for another novel called Memory Wall. As one can imagine, he never faces a shortage of ideas.