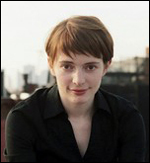 Emily St. John Mandel is the author of several novels including Station Eleven and Last Night in Montreal.

I'm not sure if writer's block exists in any sort of a global I-can't-write-a-single-word sense, but I think all writers occasionally find themselves a bit stuck. Perhaps you're not sure where to go with a story, or how to fix a plotting or character problem. When I get stuck I find that the best strategy is to just work on something else for a while and then come back to it later. There's always something else you could be writing: a different chapter of the novel you're working on, notes for a new short story, an essay. Another strategy is to do something completely unrelated to writing for a while; perhaps a long walk, or a bike ride, or a sewing project. Sometimes the solution to your problem will come to you when you least expect it.

I just had to Google writing prompts, so I think it's safe to say I don't have any. But I do keep a notebook full of ideas for stories, and if I ever need a break from the project that's occupying most of my attention, I'll sometimes start a new story based on one of these.

This isn't very original, but I heard the phrase "murder your darlings" early on and found it helpful. It's been attributed to any number of authors, but it seems that the most likely source was Sir Arthur Quiller-Couch. The idea is that whatever your work is, whether it's a literary novel or a spy thriller or a memoir or a short story, it has to be coherent and it has to move quickly; if it plods, you'll lose the reader. You have to be prepared to sacrifice writing that you love for the good of the larger work.

Another useful idea came from overhearing a novelist talking on the phone to a writer friend some years ago. She said, "Allow yourself to write badly." I don't take this literally—I can't imagine making a conscious decision to write badly—but in context, she was talking about the importance of just getting to the end of a first draft. A first draft doesn't have to be perfect. It's just a draft. But once you have it—a beginning, middle, and end of the work in question—you can start revising, and it's in revisions that the project goes from rough draft to finished work.
Subscribe to our email list Explore Our Classes