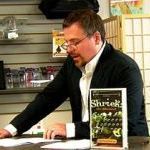 Jeff VanderMeer is the author of fiction and nonfiction books such as the Southern Reach trilogy and Wonderbook:The Illustrated Guide to Creating Imaginative Fiction.

I tend to have multiple stories or novels in play at once, and although I will then focus on one, if I get blocked I’ll just switch over to something else until I’m ready to return to the other thing. I also believe that notes help a lot. Which is to say, I write down every last little fragment of an idea I have for a story or novel and then type them up in story order. Having those prompts often leads to something important. And if I’m stuck, I’ll go forward in the narrative and flesh out some other part of it based on the fragments at hand. I also don’t write anything I don’t believe in or that I think I’m supposed to write, in terms of fiction. So I am never working against my subconscious. Writer’s block can also be caused by over-outlining your novel or story. If you know too much, you may find inertia setting in that makes you not want to write it. I either don’t outline or outline just enough so that I know the basic scenes but what happens within them is still improve when I write them. I’d also like to point out that stopping to think about what you’re writing, to work through the implications, isn’t writer’s block. It’s a natural part of the process.

I like to point out to students when I do writing workshops that almost anything can be a prompt. Some of the surrealist games like automatic writing or use of conditionals can put the subconscious in the right frame of mind to come up with good writing. But so can randomly choosing a photograph in a magazine and imagining a story behind the photo that has nothing to do with the context on the page. Sometimes I’ll give students photos from our travels, where the context isn’t clear and ask them to re-contextualize the photo as a fake fact in their own autobiography, to give them a sense of the give-and-take between personal experience and the imagination. You’d be surprised how many stories result from this process, and how it deepens a sense of what characterization is. The idea that ideas and characters are scarce in the world is often a self-imposed limitation. We just need to give ourselves permission to spin stories and it all tends to fall into place.

I don’t think it was advice, per se. I had a creative writing teacher, Denise Standiford, in high school who introduced me to Angela Carter and who took me seriously. That was more important than any advice. In college at the University of Florida I was fortunate enough to fall under the wing for three very well-published writers. The first was Jane Stuart, the novelist daughter of Jesse Stuart. She also took me seriously, even when my work didn’t perhaps merit it, and she critiqued it, too. At the same time, the novelist Meredith Ann Pierce allowed me to be part of a workshop she ran. Pierce really looked at my work and offered great comments. And also during that period, the poet Enid Shomer critiqued my work and was very kind to me. All of these women during my formative years as a writer made it clear to me that I had some talent and that I should pursue my writing. I’m sure they all gave me great advice as well, but you can find advice anywhere. What you can’t always find is faith.